An independent investigation into the Olympic boxing competition at Rio 2016 has determined that an informal bout manipulation system existed, with Michael Conlan's match against Russia's Vladimir Nikitin among those deemed "suspicious".

The head of the investigation commissioned by the International Boxing Association (AIBA), Professor Richard McLaren, outlined the main findings of the stage one report at a press conference in Lausanne, Switzerland on Thursday.

The report states that "approximately nine bouts" were "suspicious beyond the two raised in the media at the time" - one of the latter in reference to Conlan's controversial split decision loss to Nikitin in a bantamweight quarter-final and the other being a gold medal heavyweight match between Russia's Evgeny Tischenko and Kazakhstan’s Vasily Levit.

"We have confirmed that a bout manipulation system by officials existed at Rio," McLaren said at Thursday's press conference.

"The seeds of that system were sown years before, starting from at least the Olympic Games of the 21st Century through the events around 2011 and London 2012."

Conlan reacted to the report on social media, asking the AIBA to send him his 2016 Olympic medal.

Lads I want my medal, get it sorted an ill DM you my address. Thanks. MC @AIBA_Boxing https://t.co/pjBY4tLHQr

The Irish Athletic Boxing Association (IABA) which governs amateur boxing in Ireland said it was "not surprised" by the early findings in the investigation.

"The IABA is disappointed but not surprised to hear the initial findings of the independent report led by Professor Richard McLaren and commissioned by the sport's world governing body, AIBA, into the boxing matches at the Rio 2016 Summer Olympic Games," they said in a statement.

"We have always held the position that we were unhappy with the outcomes of the matches at the Rio Games.

"The IABA understands that the investigation will now be broadened and looks forward to receiving the outcome of that report before making further comment."

McLaren said that the qualifying tournaments of 2015 and 2016 in the lead-up to the Rio Games were the "practice ground for the corruption and the manipulation of the bouts at Rio" and "fine-tuned in anticipation of its use" at that year's Olympics.

A "culture of fear, intimidation and obedience" underpinned this, he continued, and that "anyone who acted ethically or questioned the corruption was sidelined" and - using a "Santa Claus" naughty or nice analogy - that "naughty" referees and judges were "gifted an appointment at Rio" because they were either willing or coerced into manipulation.

On the motives behind the manipulation of bouts, he said that it was done "for money, perceived benefit of AIBA, or to thank national federations and their Olympic committees, and, on occasion, hosts of competitions for their financial support and political backing."

"The president of the AIBA at the time (Wu Ching-kuo) bears ultimate responsibility for the failures of the officiating at Rio and its qualifying events," McLaren said.

"He was supported by his executive director (Karim Bouzidi) who was the key actor in organising the field of play to allow the manipulation to flourish."

McLaren added that: "Boxing has a problem, it's not about the rules and processes. It's a people problem. For too long people have worked outside the rules."

In Conlan's fight against Nikitin, the Russian was awarded a 3-0 victory but according to the report he would have won 4-1 under a five-judge scoring system.

It goes on to add that "four judges would be required to vote in favour of a particular boxer in order to ensure that he/she was the winner. This was the case in the Conlan fight, and may indicate that the result had been predetermined." 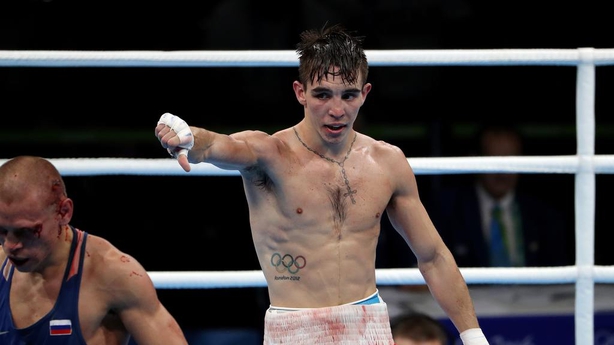 A table detailing the allocation of referees and judges by date and nationality also notes the date of 17 August 2016 as one where "five-star R&Js (referees and judges) were stood down from the field of play, following the Nikitin v Conlan bout result and the ensuing allegations of corruption".

The report also publishes the minutes of a meeting on 3 October 2016 involving members of the AIBA's Special Investigation Committee (SIC) which was investigating allegations of corruption amongst referees and judges, reviewing three contentious fights including Conlan's.

An SIC panel member is quoted as saying of that bout that: "It looked worse than it was because Nikitin was bleeding from a previous fight. The perception of mismanagement of the Conlan fight was in part because of the bloodied Russian.

"There are clear instructions about cleaning boxers when they are bloodied that weren't followed. Another factor was that Conlan's corner had told him he had lost the first round. Steps must be taken to ensure that results from previous rounds are not relayed to the ring."

Elsewhere in the report, an analysis of 65 split decision results in Rio says that 11 would have had a different winner "had all five judges' scores been taken into consideration" - including Katie Taylor's quarter-final defeat to Finland's Mira Potkonen.

However, it adds that in relation to those 11 bouts that the McLaren Independent Investigation Team "found no evidence that the official automated scoring system was manipulated. The random selection of three out of the five scores ultimately decided the winner of these bouts."

The second and third stages of the investigation led by McLaren will be released this November and in March 2022 respectively, as amateur boxing strives to cleanse its image amid suggestons it may be excluded from future Olympic Games.