The journalist accused of misquoting Tyson Fury over comments he made about homosexuals and paedophilia has said he'd have no problems releasing the recording and described elements of the interview as "unsettling" and "dangerous".

In Oliver Holt's article, published in the Mail on Sunday on 7 November, Fury is quoted as saying: "There are only three things that need to be accomplished before the devil comes home.

"One of them is homosexuality being legal in countries, one of them is abortion and the other one’s paedophilia. Who would have thought in the 50s and 60s that those first two would be legalised?

"When I say paedophiles can be made legal, that sounds like crazy talk doesn’t it? But back in the 50s and early 60s, for them first two to be made legal would have been looked on as a crazy man again."

Fury -  who beat  Wladimir Klitschko for world heavyweight crown in Dusseldorf on Saturday night - told Sean O’Rourke on RTÉ Radio 1 on Tuesday morning that he had been “misquoted”, adding: “It's newspapers trying to sell papers on writing bad things about me.

"I don't have any hate for anybody. I'm not homophobic, I'm not racist. I'm not against any people. All I have for people is love. At the end of the day, we're all brothers and sisters in God. What people do is none of my business.”

"The way he conflated homosexuality with paedophilia is a very dangerous road to go down."

However, speaking to Damien O'Meara on RTÉ 2fm's Game On, Holt revealed the backdrop to the interview and said: "I’m aware that he’s saying that I took his remarks out of context. That’s a familiar refrain sometimes from people who have said something they wished they hadn’t said.

“I watched the fight in a bar in Belgium and like everyone else I was incredibly pleased for Fury. I thought it was a terrific performance against a man who’s been a great champion.

“It is one of the great British sporting achievements of the year. It’s captured the public’s imagination.

“But to cut to the chase of what Tyson Fury said, the way he conflated homosexuality with paedophilia is a very dangerous road to go down because he has the power now more than ever as the heavyweight champion of the world to influence a lot of people.

"That’s a very dangerous idea that homosexuality is similar to paedophilia. The idea of responsibility does come into play there.

“It was pretty much unprompted. I mentioned an interview he’d done four or five years ago. In that interview Tyson Fury had spoken about battling feelings of depression and low moments when he felt like crashing his car into a wall. I referenced this interview and asked how he was feeling now.

"He spoke very well. But someone can speak well and also be very unsettling."

“His answer to that was that he was in a much better place and the main reason for that was that he returned - I’m going to paraphrase now - that he re-embraced his faith and was channelling all his energy through God and that was the beginning of the element of religion in the conversation.

“I found it very interesting. He spoke very well. But someone can speak well and also be very unsettling; it was certainly unsettling for the reasons we talked about, but anyway that was the context.”

Fury has claimed that a lot of what he’d said in the build-up to the fight was purely to sell the fight, and that he didn't mean most of it. But Holt responded: “It’s not your normal way to hype a fight. I felt that he was sincere; I didn’t feel it was a ruse.

"At one point he started going on about Klitschko being a devil-worshipper, who was involved with satanic rituals. The alarm bells started ringing slightly with that. I thought, ‘this is bizarre’. That seemed totally outlandish.

“The other stuff I felt was real. Rightly or wrongly, he spoke very well about it and very passionately about it. It may have been hype; I don’t know. If it was hype why he is he so keen to deny that he said it? I don’t get the logic of that.

“I have the recordings. I’d have absolutely no qualms about [releasing it].  But he’s been quoted extensively and fairly already.” 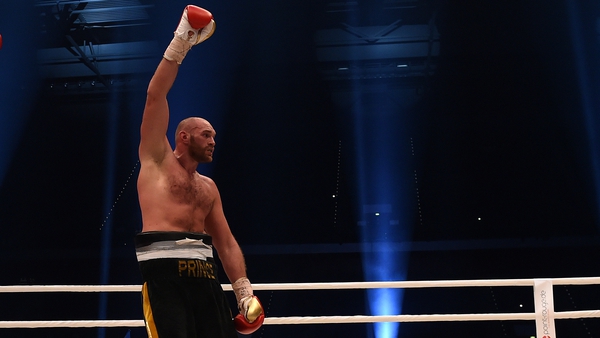