DCU Mercy bounced back from last weekend's Cup semi final loss with a bang in Waterford on Saturday evening, as they won out their top of the table clash with Maxol WIT Wildcats, 63-82.

A 27-point game from Meredith Burkhall led the charge for Mercy as they opened up a 10-point lead at half time, 34-46, with strong work under the boards from Burkhall and some strong play from Ashley Russell.

A massive third quarter from DCU Mercy saw Sarah Woods, Burkhall and Russell dominate offensively to send them into a big 47-71 point lead at the end of the quarter, leaving Wildcats with a big mountain to climb in the last.

Big work from Stephanie O’Shea and Cathy Kavanagh helped close the gap back, but DCU were comfortable 63-82 point winners in the end.

Maree got their revenge over Leixlip Amenities Liffey Celtics in Kildare on Saturday evening winning out 62-78 over the hosts.

Liffey had previously beaten Maree at their home court in Galway earlier in the season, and Joe Shields’ charges returned the favour, with Fiona Scally, Aine McDonagh and Dayna Finn in particular in superb form for the Galway outfit.

Liffey got the better start, with a blistering first quarter performance led by strong work from new signing, J’aiamoni Welch Coleman, fellow American, Briana Green and strong shooting from Niamh Masterson to see them into a 21-16 first quarter lead.

Maree came out all guns blazing in the second though, outscoring Celtics 8-30 in the period, behind superb work from Claire Rockall, Scally and Finn to lead 29-46 going in at half time.

A big second half followed, with Alison Blaney, Carol McCarthy and Finn to the fore for the visitors and despite good work by Ailbhe and Aine O’Connor for Celtics, Maree pushed out to win 62-78.

A big first quarter from the Hawks saw them into an 18-11 lead, with great scoring from Cassidy Williams and Katie Fox. Killester regrouped well during the break though, and put in a massive 25-point second quarter, with Aisling McCann in superb shooting form to drive them into a 29-36 point lead at the half.

Good work from Elaine Kennington under the boards for the hosts, as well as strong work by Williams once more, kept Hawks right in the mix but again it was McCann who was to the fore and good scores from her, along with great work from Christa Reed and Adella Randle El kept Killester out in front, and they marched home to a 54-67 point win in the end.

Fellow cup finalists Singleton SuperValu Brunell lost out to Ambassador UCC Glanmire in their big Cork derby on Sunday afternoon, with underage star, Katie Walshe picking up a hand injury during the clash, which will be a worry for Tim O’Halloran’s charges ahead of next weekend’s final.

Brunell had the better of the opening proceedings, before Glanmire knuckled down in the second quarter, with Aine McKenna, Shrita Parker and Tatum Neubert to the fore to open up a 37-26 half time lead.

Good work from Brunell’s Laura Morrissey and Treyanna Clay kept the scores coming for Brunell, but Glanmire put in a big 21-point third quarter and finished the game out strong to win out by 20 in the end, 69-49.

Fr Mathews took home a road win on Saturday afternoon, winning out 76-104 over IT Carlow Basketball in a fast-paced, high-scoring clash.

A huge first quarter from both sides saw a big 22-37 point end of quarter score in favour of Mathews, with Grainne Dwyer and Shannon Brady in flying form for the visitors – combining for a whopping 53 points in the game – while Alyssa Velles and Kaitlyn Slagus at the other end were also in stunning form, finishing the game out with 30 points and 24 points respectively.

The frantic pace continued in the second, with the half time score reading a big 42-61 in favour of Mathews, as Velles and Slagus continued to shine for the hosts, while Dwyer, Brady and Chantell Alford drove home some big scores.

The scores continued to rain in throughout the second half, and with both teams in superb form, it was Mathews who managed to maintain momentum, finishing out 76-104 winners. 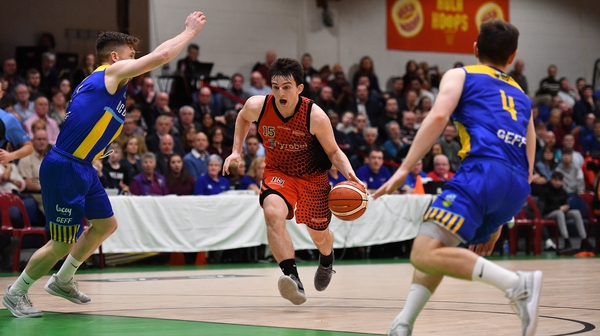