Belfast Star stormed to the top of the Basketball Ireland Men’s Super League table following a ten-point win over Garvey’s Tralee Warriors in front of a capacity crowd in the Kingdom on Saturday evening.

Big displays once more from Mike Davis and Mark Berlic along with a 25-point performance from Sergio Vidal Baldovi helped Star over the line in a pulsating game that saw a big push from the visitors late in the third to drive on down the stretch to win 79-89.

"That was two very, very good teams going toe-to-toe for a lot of the game and I thought it was a very good spectacle for the huge crowd here," Star head coach Adrian Fulton said afterwards.

"We’re delighted obviously, it’s a win and it’s a big win as it’s on the road." 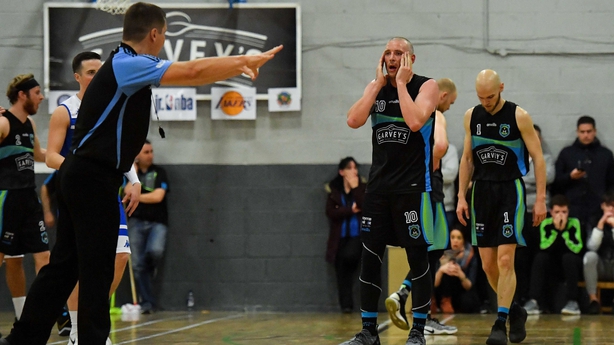 His son, 16-year-old CJ Fulton, was one of the stars on the night for the Belfast squad and Adrian was ahppy to give him praise.

"He has been doing well, we’re delighted with him," he added. "We didn’t think he’d be playing nearly as much as he is. It’s more out of necessity - Aidan Quinn is injured, Conor is basically playing with one hand, and CJ was given the opportunity and he’s grasped it."

DCU Saints meanwhile took home the bragging rights from their Dublin derby with Templeogue, winning out by just one point at the death (67-68) at Oblate Hall.

Huge performances from Martins Provizors and Mike Bonaparte – who combined for 42 points on the night – helped DCU to put the game in the melting pot in the third quarter and Tariq Guebaili was the hero of the hour when he put Saints ahead by the minimum with five seconds to go.

Templeogue just couldn’t find the target from the free throw line as the seconds ticked down.

C and S Neptune got their first win of the season, edging out old rivals Maree 90-84. The experience of Lehmon Colbert (24 points) and raw talent of young Darragh O’Sullivan (23 points) led Paul Kelleher’s side to a much-needed victory.

UCD Marian got back to winning ways with an 86-64 point win over Keane’s SuperValu Killorglin in Dublin.

Top scoring from Conor Meany and Mike Garrow helped the hosts into a 41-27 point lead at half-time and they didn’t look back from there, despite the sharp shooting of Killorglin’s Pierre Newton which saw him finish the game on 30 points.

Another huge display from guard Elijah Mays saw him finish with a tally of 32 points to help Swords to a fourth consecutive win.

Pyrobel Killester also got another win under their belts on Saturday evening, running out 99-74 point victors over Moycullen in Clontarf.

In the Women’s Super League, Courtyard Liffey Celtics and Ambassador UCC Glanmire remain the only two unbeaten teams in the league, with four wins from four games apiece. This tees up a hugely interesting clash between the two sides next Saturday evening when they go head-to-head in Upper Glanmire.

Liffey Celtics ran out impressive 80-57 point winners over DCU Mercy in a big battle in Leixlip.  A combined 54-point display from Celtics’ Americans Briana Green and Allie LeClaire helped them to glory.

"I’m absolutely delighted with the win," said Liffey head coach Mark Byrne. "I thought we played really well at times especially in the second half. I think, like some other games we’ve had this year, the scoreline maybe flatters us a little bit as DCU are very good and it was a tough game, but I’m really, really happy with how we played."

Ambassador UCC Glanmire meanwhile took the spoils against IT Carlow Basketball on Sunday afternoon, running out 49-61 point winners after a convincing display from the Cork side.

Pyrobel Killester came out on the right side of the result in their showdown with NUIG Mystics on Saturday evening, winning 82-44.

Niamh and Grainne Dwyer meanwhile were on hand to save the day for Fr Mathews as they secured a two-point victory at the death in a ding-dong battle in the Parochial Hall.

With nothing separating the sides throughout the contest, two free throws in the dying seconds from the cool hands of Niamh Dwyer were followed at the other end by a vital steal by Grainne to earn a 70-72 win.