LeBron James and Kyrie Irving led the way as the Cleveland Cavaliers completed a historic comeback to win the NBA title for the first time.

Trailing 3-1 to the Golden State Warriors after four games of the finals, the Cavaliers became the first team ever to overturn such a deficit to win the finals.

James had a triple-double of 27 points, 11 assists and 11 rebounds, following back-to-back 41-point hauls to take the series the distance, and Irving added 26 points including a crucial late three-pointer to earn a 93-89 win in a tense decider.

While James and his team celebrated, Warriors star Stephen Curry's tough finals series continued with a 17-point day including just three in the fourth quarter.

LeBron goes ALL IN for the @SAPSports Performance of the Night. https://t.co/9ABPfSLBGx

Curry was named league MVP as his team finished with a record 73-9 record but he was overshadowed on Sunday by team-mate Draymond Green, who allied his trademark fierce defence - 14 of his 15 rebounds came at that end of the court - with 32 points and nine assists.

The game was close throughout, though Golden State led 49-42 at half-time with 22 points from Green.

At 54-54 early in the third quarter, Curry snuffed out a three-on-one Cleveland break and raced straight up the court to score, adding a three-pointer moments later.

The Cavs opened up a seven-point lead only to be pegged back by an 8-1 Warriors run and the home team led 76-75 after the third quarter. 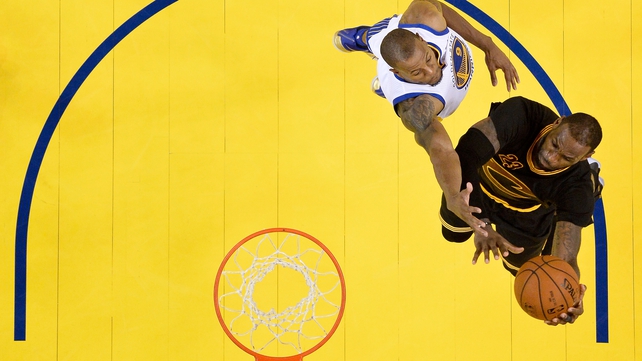 It was locked at 89-89 with 3:40 left, the lead having changed hands 20 times, and the score remained the same at a timeout with 1:09 remaining as Andre Iguodala and James blocked each other's attempts.

Irving's tremendous three-point jumper finally broke the tie and after Curry missed, James took a heavy fall when fouled by Green and made one of the two free throws to clinch a four-point winning margin.

James told ESPN: "I set out a goal, two years ago, when I came back, to bring a championship to this city.
"Cleveland, this is for you.

"I understand what the people of north-east Ohio have been through. I'm happy to be a part of history.

"I knew what we were capable of, even being down 3-1 against the greatest regular-season team ever. Everybody counted us out, and that's when we strive the most.

"This is what I came back for. This is unbelievable, it doesn't feel real right now.

"We're in the record books. We're the first team ever to come back from a 3-1 deficit. This is special."

Irving said of James: "Best player on the planet right there, as you can see with the finals MVP. He took us home tonight, that's what great players do. He made history tonight. This is one for the books."