The run retakes the Irish national senior record which Rhasidat Adeleke (7.21) had claimed from Scott earlier this indoor season.

The performance, which saw the St Laurence O'Toole athlete explode from the blocks in her now customary style, continues a remarkably consistent season which will now conclude at the World Indoor Championships in Belgrade next month.

The men's 60m also had fans on their feet with Israel Olatunde of UCD AC posting a blistering 6.62 championship record. The personal best performance for the 19-year-old was just 0.01 seconds outside the Irish record and secured the World Indoor standard.

Those in attendance at the Sport Ireland National Indoor Arena were also treated to a new Under-23 national record from Sarah Healy in the 3000m (8:53:67), securing the first gold medal of the day with a brilliant display of solo running for the last 1000m.

Healy claimed a prominent position from the gun alongside fellow Olympian Michelle Finn (Leevale AC), before upping the tempo with five laps to go on her run to gold.

Healy will now focus her attentions on the 1500m with World Indoor qualification already secured.

All eyes were on the 400m come the afternoon session, and it didn’t disappoint with Phil Healy (Bandon AC) running a stormer to clock 51.75 (CBP), just 0.01 outside of her personal best.

Sophie Becker (Raheny Shamrocks AC) claimed the silver medal in a personal best time of 52.64 which is inside the World Indoor qualifying standard 52.90.

Cillín Greene (Galway City Harriers AC) took the men’s title in a front running display which saw him cross the finish line in isolation for 46.64.

Challenged by Nadia Power (Dublin City Harriers) down the home straight, Hartigan crossed in a time of 4:23.62.

The 800m finals included some star names, and Olympians Louise Shanahan (Leevale AC) and Mark English (Finn Valley) lived up to their favourites tags to take the gold in their respective races.

Both 2020 Tokyo Olympians were made work for their titles, with Shanahan challenged throughout by Claire Mooney (2:07:13) of Naas AC who would eventually finish in the silver medal position. Shanahan secured the gold with a time of 2:06:72.

Mark English looked somewhat more comfortable in his gold medal winning performance (1:49:39), but the race wasn’t over until the final stride with both Cillian Kirwan (Raheny Shamrock AC) and Roland Surlis (Annalee AC) finishing well to complete the podium. 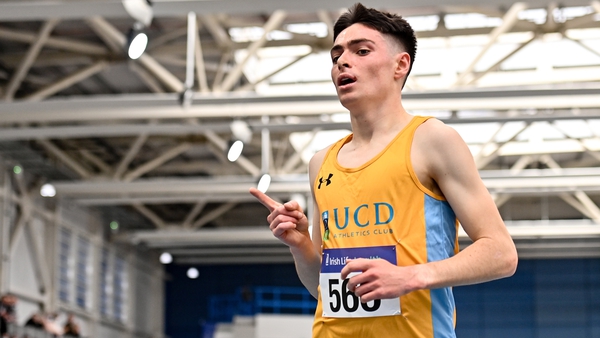