Darragh McElhinney (UCD AC), who recently broke the Irish Under-23 record showed all his class to take the 3000m gold medal in what turned out to be a hugely tactical race, crossing the line in eight minutes 2.84 seconds.

It was a stacked contest, and fans got to see the exciting Nick Griggs (Mid Ulster AC) going with the injection of pace set by McElhinney with five laps to go.

Griggs, the Irish Under-20 record holder, stayed on bravely for sliver.

It was 19-year-old McDonnell who would eventually come out on top in a blistering time of 20.86, which saw the Galway star go third on the Irish all-time list. 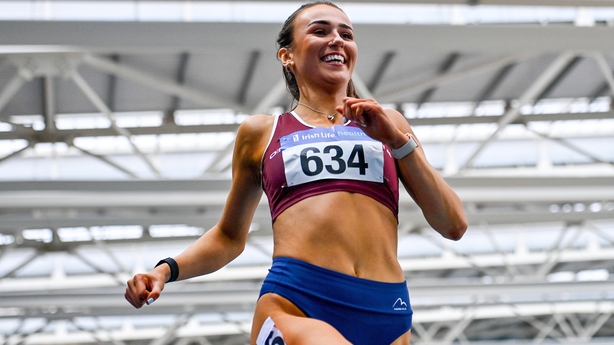 Sharlene Mawdsley (Newport AC), pictured above, secured the women’s 200m in impressive style, breezing through the morning’s heats before battling it out for gold with Sarah Leahy of Killarney Valley AC in the final.

Mawdsley looked all class in the final and maintained her form coming around the final bend to cross the line in a winning time of 24.05.

There was also action aplenty in the field events, with Eric Favors making the trip from the US all the more worthwhile by taking the shot put title, while Zoe Mohan (Cushinstown AC) secured the other throws title on offer, claiming the WFD gold.

Sarah Buggy (St Abbans) claimed yet another indoor triple jump title, while David Cussen of Old Abbey AC had the crowd willing him on as he bid to clear 2.15 in the men’s high jump competition. He cleared on his third attempt to secure the gold medal from Ciaran Connolly of Le Chéile AC in second.

Ellen McCartney (City of Lisburn) lived up to favouritism in the pole vault, while Shane Howard (Bandon AC) secured the long jump.

Sunday’s action starts at 11am with the heats of the men’s 60m.