LaShawn Merritt anchored the United States to a sixth successive world 4x400 metres relay title to bring down the curtain on the 15th world athletics championships in Beijing.

Merritt, who has been part of all six campaigns over the last decade, ran his leg in 44.16 to overhaul Jamaica's Javon Francis on the final straight and cross the line for gold in 2.57.82 seconds, the best time of year.

Trinidad and Tobago, who led after the first three legs, won silver in a national record 2.58.20 and Britain pipped Jamaica to third place in 2.58.51.

Francis started the final leg at a searing pace to lead down the back straight but tired towards the end and was caught on the line by Britain's Martyn Rooney.

However, Jamaica stunned the US in the last women's track race of the championships as Novlene Williams-Mills snatched the 4x400m  gold by passing Francena McCorory in the final 10m of a thrilling race.

Jamaica had held a 15m lead over the US at half-way, after strong runs by Christine Day and Shericka Jackson, only to see America's individual 400m champion, Allyson Felix, deliver an astonishing leg to chase down and catch Stephenie Ann McPherson and hand over the stick for the anchor leg with a slight lead.

Felix's leg of the relay was timed unofficially at 47.7sec but it was to prove in vain as Novlene Williams-Mills ran a shrewd final lap to overhaul a tiring Francena McCorory and win Jamaica's third relay gold medal of the Beijing championships, and her nation's seventh of the week. 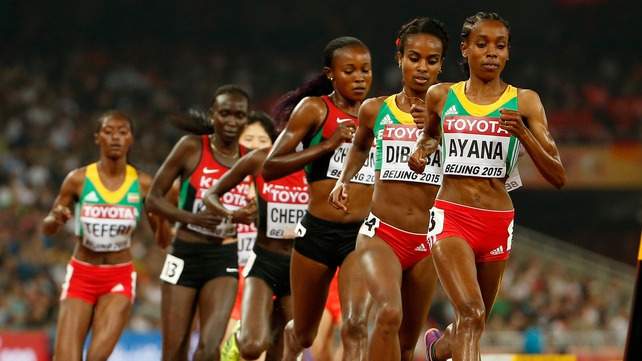 Earlier, Ethiopia's Almaz Ayana has put on a brilliant display of front-running to win the women's 5,000 metres at the world championships in Beijing, depriving compatriot Genzebe Dibaba of an unprecedented double gold in the process.

The 23-year-old broke for home with four laps to go and clocked a championship record 14.26.83 to win by more than 17 seconds, leading home an Ethiopian podium sweep.

Dibaba, who was hoping to become the first woman to win both the 1,500m and 5,000m at the same world championships or Olympics, was pipped at the line by compatriot Senbere Teferi, who took silver in 14.44.07.

To add insult to injury, the championship record Ayana bettered was set by bronze medallist Dibaba's sister Tirunesh at the 2005 world championships. 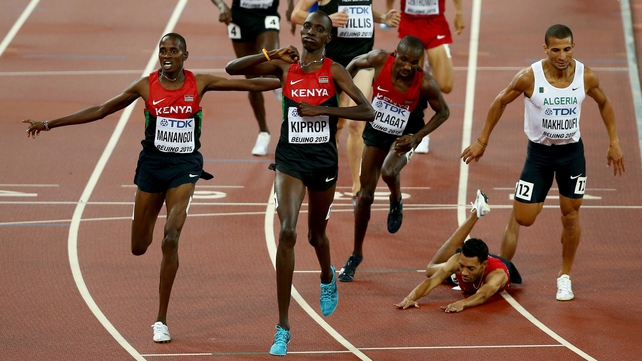 Meanwhile, Kenya's Asbel Kiprop won a third world 1,500m title, with the 2011 and 2013 champion producing a late charge from 12th place to first in the last half-lap to take gold.

The tall and leggy Kiprop, 26, strode majestically to the finish and clocked 3.34.40, running the final lap in 51 seconds as his rivals battled and stumbled behind him to the line.

Kiprop won Kenya's seventh gold medal of this world championships, his team mate Elijah Manangoi took the silver in 3.34.63 and Morocco's Abdelaati Iguider threw himself across the line to secure the bronze in 3.34.67.

There was also late drama in the women's javelin competition, with Germany's Katharina Molitor securing gold with the final  throw of the competition to deny hosts China a second title at the championships.

The 31-year-old, who had never previously won a medal at a major championships, launched the javelin a world leading 67.69 metres with her sixth effort.

That relegated China's Lyu Huihui, who had led the way after an Asian record 66.13m with her fifth throw, to the silver medal position, disappointing a noisy crowd at the Bird's Nest Stadium.

South Africa's Sunette Viljoen, who had owned the previous best throw of the year, won a second world championship bronze after her 2011 podium finish with 66.13m.