Mark English, Declan Murray and Ciara Everard (all 800m) have all progressed to semi-finals in the European Indoor Athletics Championships, but Dara Kervick narrowly missed out on the 400m final after earlier winning his heat.

Afterwards English told RTÉ Sport: "My plan was to sit on the shoulder of the leader. I knew it was too quick at the start, so I just had to bide my time and move onto the back straight over the last 200 metres.

"I always wanted to make the final, I think if I do make the final then I have a really good chance, I just want to go and put it all out on the track."

Chicago-born Murray, meanwhile, said: “I was happy enough with it. I thought it might be physical so I wanted to run from the front.

“I’ll just see how the draw for the semi-final goes and give it everything to try and make the final.”

Kilkenny's Dara Kervick missed out on a place in the final of the 400 metres.

Kervick finished fourth in his semi-final in a time of 46.96.

Earlier, he won his heat in 47.03 to advance to the semi-finals. 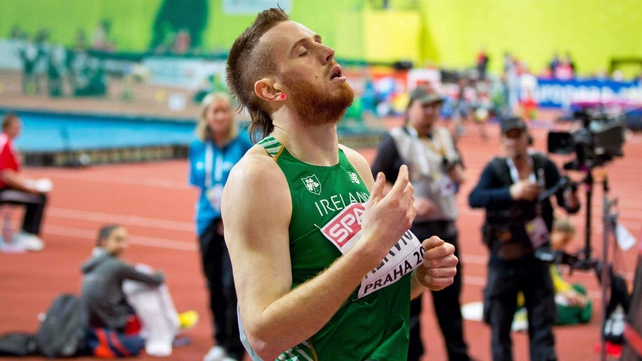 Speaking after the semi-final, he said: “If you had told me at the start of the season, I would run 46:5 and been at a major championship, I would have bitten your hands off.

“The plan was to get out fast and try and tuck in with [Pavel] Maslak, I just got into the wrong position and kind half went, but that’s a tactical race, that’s the experience you get running major championships.”

Kervick will be part of the Irish 4 x 400 metre relay team which will be in action on Sunday.

The time was a seasonal best for the 24-year-old Kilkenny woman and was enough to see her advance as a fastest loser.

"I knew Anita Hinriksdottir [Iceland] would go out hard, I just wanted to hang to the fastest loser spot," said Everard.

"It was just outside my personal best and I know I’m coming into form at just the right time."

“I’m disappointed with that, the first goal was to make the final, [but] it’s a one second personal best. The fact I got here is a big achievement," added Pollock, who was ruled out of the European championship marathon at the last minute.

“It’s another championship under my belt, but I haven’t been able to get the performance I wanted today.”

Ger O'Donnell failed to progress from the heats of the 60m hurdles.

The Leitrim runner finished in sixth place in his heat in a time of 8:06 seconds, a time which meant he was unable to progress as a fastest qualifier.

O'Donnell was left disappointed with his performance, during which he knocked over several hurdles and finished in a time that was some way off the 7:73 with which he qualified for the Championships.

"[I'm] very disappointed with that," explained O’Donnell. "It was a sub-par performance on all accounts, I got left in the blocks. I had been working on my start all week.

"I have no excuses, I just didn’t run the best."

He said he would now turn his attention to the World Championships later this year.

"As people are saying it’s a championship race, my first major, I don’t care about that. I should be in that semi-final. This is where I want to be, I’m not fazed by that and I will focus on the making the 110 meters hurdles for the World championships in Beijing."