The crisis in Greece appears to be reaching a new height with concerns growing that the country may be moving closer to default.

On the line this morning was Peter Spiegel Brussels correspondent of the Financial Times.

Exposure to explicit images of sex, torture and self-harm online is putting children at risk of developing Post-Traumatic Stress Disorder similar to the experience of combat veterans, groundbreaking research from the RCSI’s director of cyberpsychology Professor Mary Aiken has found.

Professor Aiken, the inspiration for the new ‘CSI-Cyber’ series,  is giving a first of its kind TEDx talk to children in Dublin tomorrow, and she joined Sean in studio.

Sentenced to Life by Clive James is published by Picador, £14.99.

The Credit Union - helping people stay away from Loan Sharks and stay out of debt.

Paddy O'Gorman visited some Credit Unions and spoke to those who use the Credit Union to get themselves loans for bills, clothing and summer time.

Our weekly preview of tonight's Callan's Kicks - airs on RTE Radio 1 at 6.30pm.

Good news for anyone feeling a little over the hill this morning – it turns out that ageing is changing and that 60 is actually the new 40.

The lengthening of our life spans in the last 100 years means we can all expect to live longer, but does society still treat older people as has-beens?

Entrepreneur Dr Edward Kelly has set up an organisation called The Third Act to help people think about how they can continue to contribute and fully enjoy life well past what we now consider to be ‘retirement’ age. 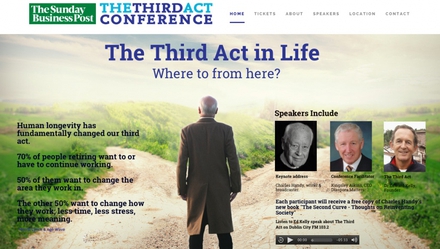 Read More: Why 60 is the new middle age: Our longer, healthier lives means we aren't classed as elderly until at least 70

Read more: Why 60 is the new middle age: Our longer, healthier lives means we aren't classed as elderly until at least 70

Read more: Why 60 is the new middle age: Our longer, healthier lives means we aren't classed as elderly until at least 70, Fiona Macrae, The Daily Mail, 15th April 2015

To our weekly round-up of the news of the week, a week where we saw Seanad Reform proposals, a threatened bus strike, 400 illegal migrants died when their boat capsized off the coast of Italy, a new report on Insolvency and Mary Lou McDonald and Dail privilege.

For a look back at these stories and more, Peadar Tóibín, Sinn Féin TD for Meath West; Brenda Power, Columnist with the Sunday Times and Irish Daily Mail; David Hall, CEO of the Irish Mortgage Holders Organisation; and Labour Senator Lorraine Higgins all joined Sean in studio.