In tonight's special episode, titled 'Three Killings’, presenter Myles Dungan visits the Military Archives at Cathal Brugha Barracks in Dublin. He investigates the stories of two branches of his own extended family during the Irish War of Independence. 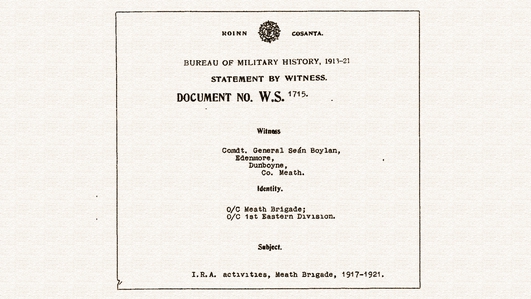 In tonight's special episode, titled Three Killings, presenter Myles Dungan visits the Military Archives at Cathal Brugha Barracks in Dublin. He investigates the stories of two branches of his own extended family - the McKennas and the Clintons - during the Irish War of Independence.

In the programme we hear from:

1. Padraig Óg O'Ruairc, the author of Truce: Murder, myth and the last days of the War of Independence. He has made a detailed study for the Atlas of the Irish Revolution of IRA executions during the Anglo-Irish war.

2. Philip Boucher-Hayes, the RTÉ broadcaster and journalist, whose ancestors play a role in this story.

3. Stephen McKenna, who is based in London, is the McKenna family historian

4. Frank Cogan is a local historian who has made a particular study of Meath in the 1919-21 period.

6. Seán Boylan, herbalist and Meath GAA legend. His father was an IRB Member and IRA Commander close to Michael Collins himself.

Thanks to all the archivists at the Military Archives, for their assistance in identifying the witness statements and military pension applications used in the programme.

The actors who brought to life the witness statements from the War of Independence period were Manus Halligan, Mark Manning and Simon Delaney.