On this week's programme, Myles Dungan visits the Military Archives at Cathal Brugha Barracks in Rathmines, to find out how their treasure trove of documentation was created, how their collections are stored and collated, & what they tell us about the Anglo-Irish War. 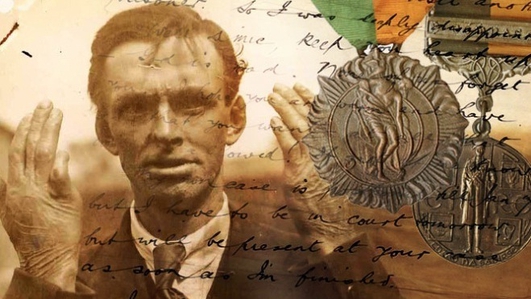 Today we’re on location, at the home of some of the most comprehensive and fascinating documentary material in the national collection. As we continue our series on the War of Independence today’s programme is coming from the facility that has prompted a huge upsurge in local and national research into the revolutionary period: the Military Archives in Cathal Brugha barracks in Rathmines in Dublin.

Since the digitisation of the Bureau of Military History Witness statements, the Military Service Pension applications and the IRA Brigade Activity Reports online access to a treasure trove of documentation from the revolutionary period has been available to academic, local and family historians.

So much of what we know about the War of Independence comes from this repository. The 1913 -23 period is one of the best documented of revolutions largely because of the thousands of files stored here.

Today we will find out more about how these collections came about, how they are stored and collated and what they tell us about the Anglo-Irish War. We’ll be talking to the people tasked with the preservation and dissemination of this collection and to archivist Catriona Crowe about the inestimable value of what is being maintained and organized in this  military facility in suburban Dublin.

Our guests this evening:

1. Captain Daniel Ayiotis, Officer in Charge of the Military Archives. He traces the institution’s history back to the end of the Civil War, describes the early attempts to collect testimony,

2. Catriona Crowe, the former head of special projects at the National Archives of Ireland, talks about the inestimable value of what is being maintained and organized in this military facility in suburban Dublin. She talks about her own involvement, and that of the late Commandant Peter Young, in making this unique collection accessible to the public. She also describes how to use these collections when tracing your own ancestors.

3. Hugh Beckett, a civilian archivist, describes the process by which the Bureau of Military History's witness statements were collected between 1947 and 1958; he also talks about some of the voice recordings of prominent figures held by the Military Archives.

4. Cecile Gordon, senior archivist and Project Manager of the Military Service Pensions Collection project, describes why a newly established state, with few resources and a damaged country to repair, allocated hundreds of thousands of pounds of tax payers money towards pensions for former IRA veterans - many of whom were still in their twenties.  She also discusses the the various government acts that set out who was eligible for a pension.

5. Lisa Dolan, Head of Reader’s services, Education and Outreach, talks about the papers of Michael Collins, another unique collection housed by The Military Archives.

6. Michael Keane, civilian archivist, talks about some of the most recent material to have been digitised - the Brigade Activity Reports. These reports offer a detailed picture of the actions undertaken around the country by local IRA units. To illustrate the importance of this collection, Michael looks at a report on the activities of the IRA in Belfast.

7. Noelle Grothier is a civilian archivist. She talks about voice recordings made recently by the MIlitary Archives, of two women - Marie Burke and Maura White - who worked in the Military Archives when the Bureau of Military History Witness Statements were being collated in the 1950s.

8. Rob McEvoy is one of the archivists charged with the preservation of the Medal Applications Collection. He describes the different types of War of Independence service medals, and who applied for these medals.