On this week's programme, we present the first in a new series of episodes on the Irish War of Independence. Brian Hanley, Heather Laird, Daithí Ó Corráin and John Gibney join Myles Dungan to discuss how the war began, and how Dáil Eireann built and financed a new Irish republic. 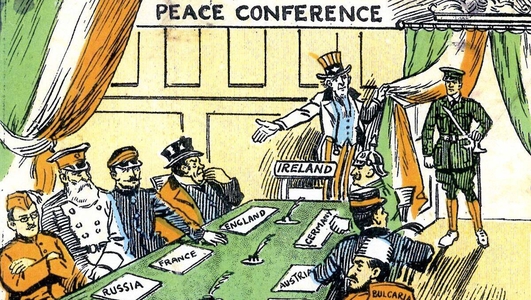 As we return for a new season, tonight we present the first in a special series of episodes on The Irish War of Independence.  For the next few months, we’ll be exploring different aspects of the conflict – from the meeting of the First Dáil in January 1919, to the signing of the Treaty in December 1921.

Tonight’s programme – The Gathering Storm. How the war began with early ambushes, attacks on RIC Barracks, and skirmishes. How Dáil Eireann set about building and financing the new Republic, and how the government emphasised its legitimacy through the new institution of the Dáil Courts.

Myles Dungan is joined in studio by Brian Hanley, an historian and author; and Heather Laird, a lecturer in the school of English at University College Cork, and the author of the 2018 book Commemoration and the 2005 book ‘Subversive law in Ireland, 1879–1920.

Also joining Myles is Daithí Ó Corráin, a lecturer in history in the School of History & Geography at Dublin City University. Dáithí is also co-editor, with Marian Lyons, of the county-by-county Irish Revolution series published by Four Courts Press.

Also, in a report from Lorcan Clancy, we''ll hear about the revolutionary diplomats of Dáil Eireann’s nascent foreign service, and their attempts to garner international support for the Republican cause. Historian John Gibney shares his research into the lives and work of several of these diplomats.