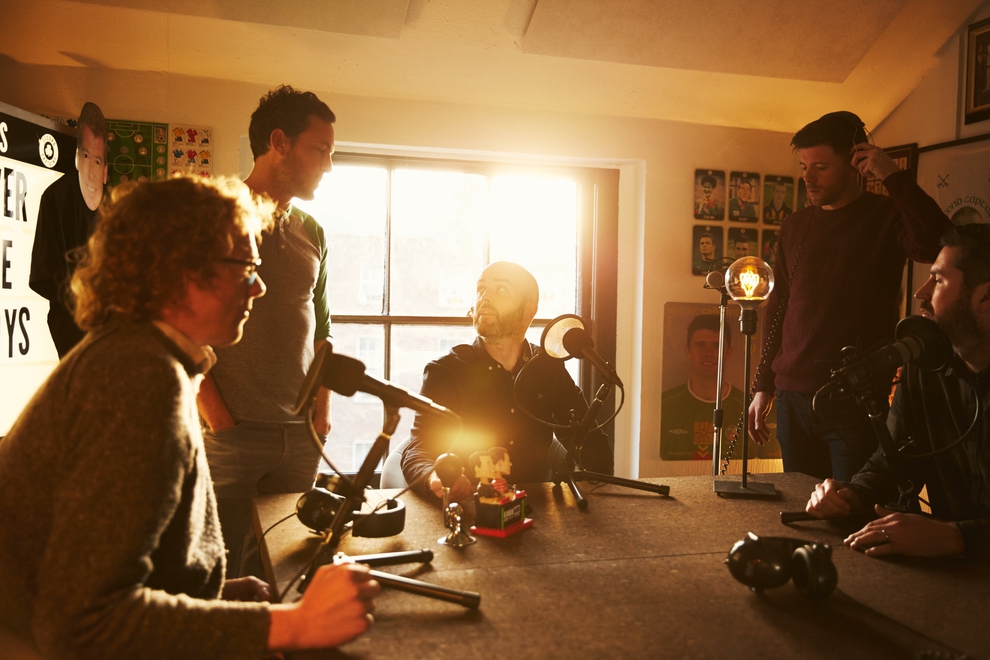 Shortlisted for the Booker prize three times, won the International Dublin Literary Prize for ‘The Master’ and the Costa Book Award for Brooklyn, was Eamon Dunphy's bodyguard at Italia 90, wrote about Maradona's life of 'samba y caramba' and hates tv, twitter, romance novels and dynamic tennis. This is a fun chat with the brilliant Colm Tóibín

Peter Hain served in successive Labour governments under Tony Blair and Gordon Brown, was Leader of the House of Commons and Secretary of State for Northern Ireland and he’s now a member of the House of Lords.

Writer, actor, playwright, poet, social commentator, the creator and star of the award-winning Dublin Old School, and former hockey daydreamer Emmet Kirwan joins us in studio and Jim Carney tells us how wild the KK Tipp rivalry was in the 60's.

In 2010 Roisin Conaty won best newcomer at the Edinburgh Fringe. She’s acted in After Life and created, produced and starred in the sitcom GameFace. AND she once won a celebrity darts tournament with the nickname The Wedding Slinger. Plus author Mike McCormack helps us figure out what it’s like to be a Mayo football fan.

Journalist and activist Eamonn McCann dedicated his life to campaigning for civil rights, most famously in his efforts on behalf of the victims of Bloody Sunday. Eamonn also supported Brexit at the time of the referendum. We discuss his current opinions on Boris and Brexit, his love for Derry City.... and the time he was hit by Seamus Heaney.

The legendary John Simpson has reported from 140 countries. He has interviewed 200 world leaders. During the Iran revolution he flew to Tehran with Ayatollah Khomeini, he dodged bullets in the Tiananmen Square massacre and was in Iraq during the 2003 invasion. BUT... how good was he at sport, and did he land a punch on Harold Wilson?

Catriona Crowe is Ireland's foremost archivist and of the country's most respected social commentators. We ask her about dodging sport, deceiving nuns, Biddy Early's curse and why, in the social media age, history is still important.

This week we have the brilliant Senator George Mitchell on the show - US Attorney, US Army, Federal Judge, Senator, and he brokered the Good Friday Agreement. He tells us about his family's amazing life story, 'Swisher' Mitchell and his own sporting life.

Andy Irvine is an Irish music legend, an Everton fan, was a child actor, and a friend of Woody Guthrie. We were honoured to have Andy in studio to talk about his amazing life touring with Planxty

Cody Keenan has been writing for and with Barack Obama, former leader of the free world, since 2007, but the real test comes today when we explore his sporting credentials. We talk about writing Obama's recent speech commenting on Trump, Cruz/O'Rourke in Texas, Colin Kaepernick and his own high school football career.

As one of Ireland's greatest current writers, Kevin’s works have been recognised with some prestigious international awards over the years, but will his pool playing skills be enough to take the crown of Ireland's Greatest Non-Sportsperson Sportsperson?

Sharon Horgan has created & starred in some of the best shows on tv, such as the multi-award winning Catastrophe on Channel 4. Sharon’s brother Shane is a legend of Irish rugby and Sharon talks us through her bionic cross country running abilities.

Gabriel Byrne is a true acting great - star of Miller’s Crossing, The Usual Suspects and Stigmata , not to mention his Golden Globe winning TV roles and stunning Broadway performances. As a former victim of clerical abuse, he talks to us about the Papal visit, Ireland's relationship with Catholicism, and the time he met Muhammad Ali.

Eoin, Ken and Murph are joined by X Factor and BBC host Dermot O'Leary plus the great Jim Carney (Uncle Jim) one of Ireland's greatest ever GAA journalists and the first presenter of The Sunday Game joins us to talk about Galway v Dublin in 1983. PLUS PLUS there's music from Villagers, Neil Young and Lisa Hannigan.

Aisling Bea is one of the very best comedians and actors in the business. You'll know her from 8 out of 10 Cats, Live At The Apollo, The Fall. She talks about her mum Helen's career as a jockey, her own successes and failures, and her father's death by suicide.

We count down to the World Cup final with one of Ireland's most successful ever writers Paul Howard. We discuss Roy Keane's punditry, Spanish cologne, and being a bespectacled street footballer in 1980's Ireland. Plus Ken snuggles up with Mother Russia and asks for some French flair.

David Baddiel: novelist, writer of children's books, wrote a screenplay for Infidel, a successful stand-up.. and the person who wrote 3 Lions with Frank Skinner. He joins us to discuss 'it's coming home', England's run in the World Cup, fan culture and his sporting life.

Legendary broadcaster and the hardest working person in showbiz, Clare Balding, joins us for the final show of the current series of Second Captains. We discuss gender pay gaps, the Cromwell connection, the success of women's sport and of course her own sporting achievements. Plus there's Ken from Vegas on 'the greatest combat event in history'.

The brilliant Tom Vaughan-Lawlor joins us to talk about his new role in The Avengers movie and more importantly, his life as a Shoot! magazine-loving, punch-eating, junior cup rugby-playing sports fan. Will he become our Greatest Non-Sportsperson Sportseprson for 2017? Well, no. But find out how he does.

This week Second Captains talk to internationally acclaimed artist and five time national swimming champion Dorothy Cross to the show to talk about her love of the ocean, the fusion of art and sport and why its so important to take risks. Plus there's Eoin's swim lesson shame, Ken's triumph of will and Trump's new low.

Joining us this week on Second Captains Sunday is Australian stand-up comedian and presenter of The Last Leg Adam Hills. We talked to Adam about covering the Paralympic Games, eye-gouging donkeys and getting trash-talked by Mats Wilander.

This week Second Captains talk to Nicky Byrne about his career as a footballer, and the time he almost made it in the Premier League with Leeds United. Plus there's Richie Sadlier on their time together with Ireland underage sides, and how a career in pop was viewed in the football world at that time.

Second Captains welcome comedian, actor, model and hurling coach Pat Shortt into studio to discuss method acting, bad hips, Father Ted and Garage. We also look at his impressive sporting CV and ask him how he made it as a human punchbag. Plus there's Orange Fest, city breaks in July and the Roger Federer logo.

First episode of the second series of Second Captains Sunday with comedian, writer and broadcaster Maeve Higgins in New York city. Plus Uncle Jim Carney talks us through the Great GAA Armed Robbery Of 1977.

On the programme today as a Bank Holiday special we featured the Second Captains' in studio. They were celebrating the 20th anniversary of Ken Doherty's win in the World Snooker Championships and also Kathrine Switzer, the first woman to run the Boston Marathon as a numbered entry.

Kathrine Switzer is an American television commentator and marathon runner. In 1967, she became the first woman to run the Boston Marathon as a numbered entry. An official attacked her on the course, grabbing for her race numbers and screaming and cursing at her before being body blocked by her boyfriend. The incident was broadcast worldwide

It's 20 years since Ken Doherty won the World Snooker Championship when he beat Stephen Hendry in the final in Sheffield. He reminisces with the Second Captains about that great day and the celebrations when he returned home

James Vincent McMorrow had an exceptional 2016, with the launch of his 3rd album, which went straight to no. 1. He joins Eoin, Ken and Murph in studio to discuss his sporting life. He plays out the show with a special version of Prince's 'Purple Rain'. We have the brilliant David O'Doherty to put a hilarious full stop on a tough year for us all

Today the lads go back to the Tokyo Games of 1964 to hear the amazing story of the Irish runner Jim Hogan who didn’t medal, but did become a heroic figure in the childhood of the shows main guest, author and columnist Fintan O’Toole. The lads also catch up with Olympic Silver medallist Annalise Murphy and Natalya Coyle.

Oscar-nominated director Lenny Abrahamson joined the lads in studio to talk about his thrilling 2016 so far.

The second captains are joined by BBC presenter (and former Rose of Tralee contestant) Gabby Logan.