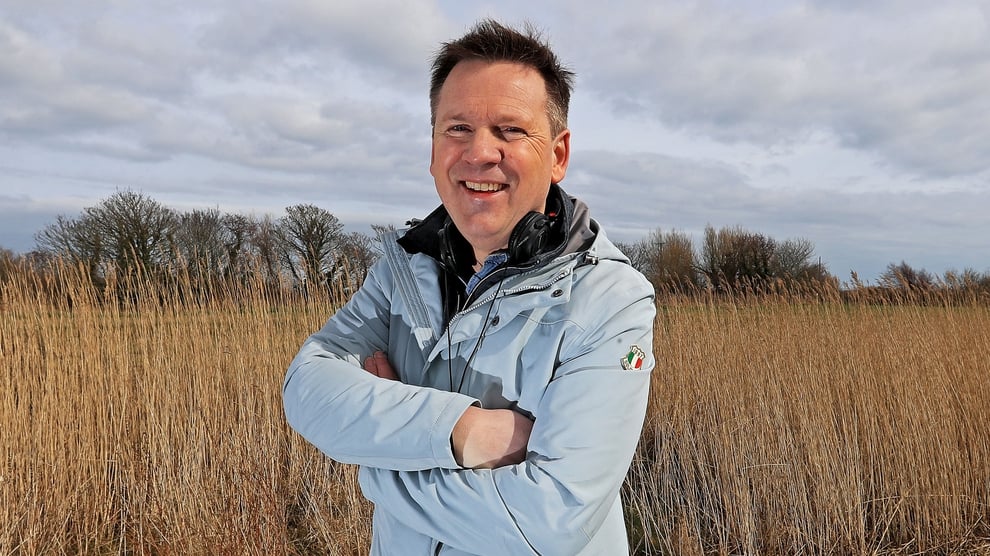 Join Derek and the team as they take a look back to this years Dawn Chorus programme.

The 'No Mow' Lawn

Save Our Oceans to Protect Our Health

Dr. Easkey Britton is based outside Westport, from where she joined Éanna Ní Lamhna, Richard Collins and Niall Hatch.

On today's show Derek talks about tame robins, Terry Flanagan on the midge, Dr Easkey Britton on cleaning our oceans and Niall McAuley joins Derek in studio to talk about 'no mow' lawns.

Derek talk's to Mick Power from Coillte about illegal dumping, Sean McKeown from Fota Wildlife Park joins us to talk about their Natterjack Toad breeding project and Richard Collins and Niall Hatch talk to Queen's PhD student, Kez Armstrong about declining Kestral numbers and a new 'Kestral Cam' in Fermanagh.

Dr Matthew Jebb, director of the National Botanic Gardens brings us up to date with the latest news on photosynthesis.

Dr Simon Berrow tells us about a petition to have Basking Sharks protected in Irish waters.

Derek and the team discuss why some birds walk while others hop. Terry Flannagan reports from Herbert Park on the mating behavior of Mallard & the aerobatic insect-catching Pied Wagtails.

Derek and team discuss why some birds walk while others hop. Terry Flanagan reports from Herbert Park on the mating behavior of Mallard & the aerobatic insect-catching Pied Wagtails. Dr Matthew Jebb brings us up to date with the latest news on photosynthesis & Dr Simon Berrow on a petition to have Basking Sharks protected in Irish waters.

Professor Francis Ratnieks from the School of Life Sciences at the University of Sussex tells us about research into foraging bees and discloses why some plant species are dominated by bumble bees and others by honest bees.

Dr Matthew Jebb, director of the national botanic gardens sings the praises of the Hawthorn tree also known as the May tree because its flowers bloom from early May to late June in Ireland. Specimens of the Hawthorn can be found in throughout the country as it's one of most abundant native species.

Birds Singing in the Rain

Derek, Niall & Richard discuss bird song and why it is that some birds like 'singing on the rain' while others keep a low profile. The Blackbird and the Mistle Thrush are two notables.

This week Derek is joined by Richard Collins and Niall Hatch and they are joined by director of the national botanic gardens, Dr Matthew Jebb who talks about the Hawthorn. They are also joined by Professor Francis Ratnieks from the University of Sussex who tells us about why some plant species are dominated by bumble bees and others by honest bees.

Terry Flanagan goes to Spencer Dock in Dublin in search of gulls.

An Post have issued two new stamps to mark Ireland's rare and dwindling natural wildlife. Angus Laverty is Public Affairs Manager with An Post and he joined us on the line.

Stephen Gallagher is founder of swarms.ie – an emergency team for swarming bees. He joins Derek in studio.

Derek is joined by Richard Collins and Niall Hatch as they listen to Goldfinch song. Elaine O'Riordan joins in to talk about the 'National Hedgehog Survey' and we are joined by Paddy Glackin and Donal Lunny in studio eight as Derek takes a look back at Dawn Chorus 2021.

The third hour of live birdsong.

The second hour of live birdsong.

The first hour of live birdsong.

The Dawn Chorus Part One

The Curlew was once a common and familiar sight in the Irish landscape, breeding in upland bogs and traditional meadows in the summer, then flocking to coastal estuaries, beaches and mudflats in the winter. Sadly, today this charismatic bird finds itself threatened with extinction, its population plummeting rapidly.

Welcome to our annual marathon broadcast of the Dawn Chorus. For six hours here on RTÉ Radio 1 and across Europe with our partners in the European Broadcasting Union we will take you on a magical journey from darkness into light, as the birds wake up and burst into song.

There have been many theories about the stick throwing Hooded Crow at John Reidy's house in Kerry. Joining us this week we have the children of St Mary's Boys National School in Booterstown, Dublin and their teacher Ms. O'Dea.

Terry Flanagan joins Derek from his back garden where he spends a lot of time observing sparrows.

Eric Dempsey joins Derek to talk about his memoir, 'Don't Die in Autumn' which will be released on the 1st of May as an audiobook.

THE SPIRIT OF THE RIVER - Declan Murphy

Declan Murphy joins us to talk about his new book - 'The Spirit of the River' and he joins us from that same river - the Avonmore near Laragh, County Wicklow.

This week includes Declan Murphy talking about his new book -'The Spirit of the River', Eric Dempsey on his memoir, 'Don't Die in autumn' being produced as an audiobook, Terry Flanagan on Sparrows and Derek talks to Jim Wilson as we look forward to 'Dawn Chorus 2021'.

Dr Simon Berrow, chief scientific officer with the Irish Whale and Dolphin Group talks about noise pollution in our oceans and the impact it is having on marine life.

John Reidy gives us an update on the door bashing HOODED CROW at his home in Kerry. Ashling de Barra sent in a video of a Jackdaw taking mouthfuls of hair from a cow's back. Éanna ní Lamhna talk's about her new book OUR WILD WORLD. Dr. Simon Berrow talks about noise pollution in our oceans and the impact it is having on marine life.

On today's show Éanna launches her new book, a crow attacks a glass door with a stick, Ken Whelan talks about rivers, we look at noise pollution in our oceans, we have a look at our cuckoo counting campaign and we take a look at the beautiful raised bog of

We launch out shout out for cuckoos campaign. Join the Mooney goes wild army of citizen scientists. Jim Wilson and Niall Hatch talk about Sand Martins and discuss the benefits of artificial sand breeding banks. Richard & Éanna answer a listeners question about devoted dads in the animal kingdom

This week Derek, Éanna and Richard discuss the Monkey Puzzle tree and they are joined by Director of Fota Wildlife Park - Sean McKeown, Niall Hatch on the rediscovery of the Black Browed Babbler, Fergal Monaghan talks about the Hen Harrier Project, Damien Hannigan on the deer population in the Phoenix Park and Terry Flanagan on feeding birds.

Terry Flanagan reports on Ladybirds. Dublin student Liam Corcoran talks about the photograph he took of a Mandarin Duck which he entered into the RTÉ Eye on Nature competition. Éanna ni Lámhna extols the virtues of National Tree Week 2021. And Derek reworks ‘The Lark Ascending’by English composer Ralph Vaughan Williams.

We take a look at the 12 finalists in the RTÉ EYE ON NATURE PHOTOGRAPHIC COMPETITION. Niall Hatch on why birds line their nests with moss, feathers and sheep’s wool and we look ahead to a two part documentary on TG4 about how wildlife faired during lockdown.

At this time of year there is a lovely stretch in the evening, birds are singing and bulbs are sprouting. So we decided to celebrate with the Mooney Goes Wild - Spring into Nature Quiz!

Derek, Éanna, Richard & Matthew Jebb discuss why a Snowdrop is called a Snowdrop. Eric Dempsey goes in search of Dublin's Brent Geese. Terry Flanagan on the 'lookdown' hobby that became a small business making birdfeeders. Niall Hatch talks to Tommy Kennedy about Woodpeckers in his garden & Brian Burke on the The 8th International Swan Census.

This week Derek and panel discuss a Baltimore frog invasion, some bestial boredom, back garden bird feeding and skeletal deconstruction in the Natural History Museum.

We talk to Dr Colin Lawton of NUIG about controlling the population of Grey Squirrels using oral contraception. Terry Flanagan talks to Susan O' Donohue about her online children's book GOLDEN WINGS, and Éanna meets Emma Finn who set up a business installing beehives for corporations that want to increase their green credentials.

We hear about plans to transform part of the Dublin mountains to make them more people friendly. We'll update you on our wildlife photography competition which is attracting thousands of entries... And we’ll bring you news of research into kinder ways of counting fish.

On this week's show: the Troubling decline of Curlew numbers in Ireland, myths about birds and why do birds wash themselves? John Reilly with an update on our photographic competition. We talk to Kerri McCrae about her Kindred Spirit Elephant Sanctuary and Terry Flanagan tells us about Nature Studies.

We launch the RTÉ Eye on Nature photographic competition. Jenny Branigan reports on BirdWatch Ireland’s annual garden bird survey. We ask how Ring-neck Parakeets are becoming regular visitors to Irish gardens. We discover the delightful sound of the Robin’s winter song and hear about the success of Barn Owl beatboxes in Cork.

It would be tragic if the Curlew were to disappear from our landscape forever. Urgent conservation work is underway to pinpoint the reasons for the bird’s decline and to develop the most effective ways to save it. In this Mooney Goes Wild special Derek meets some of the conservationists dedicated to saving this iconic species.

Join Terry Flanagan as he documents a year long biodiversity audit of Áras an Uachtaráin.

Join Derek and friends as they look into the intriguing history of the Christmas Tree.

On today's show, our expert panel pose the questions in the Mooney Goes Wild Christmas Quiz. All you need to take part is a pen and paper. The questions and answers will be given during this evening's broadcast.

This is our Christmas gift special – and this year our focus is firmly on books. Today the team will be bringing you a super range of ideas for presents all inspired by the natural world. So sit back and relax as we take you to the MOONEY GOES WILD virtual bookshop.