Clover is a common flowering plant all over Ireland, loved by some and despised by others. Gardeners see clover as a weed. Farmers know it helps make soils more fertile. Children suck the sweetness from its flowers. Bees depend on it as a reliable source of nectar. Nature File this week looks at how common clover is seen from so many different perspectives.

Sean Rafferty presents the first opera by Vivaldi ever performed at the Royal Opera House in London, a co-production with Irish National Opera featuring the Irish Baroque Orchestra and their artistic director Peter Whelan, with stage direction by Adele Thomas. The brutal conqueror Tamerlano has crushed the Ottoman Emperor Bajazet and imprisoned him in his own palace. But now Tamerlano has fallen for Bajazet's traumatised daughter Asteria - to the horror of both Asteria's admirer, the Greek Prince Andronico, and Tamerlano's intended bride Irene, Princess of Trebizond. Enjoy the adrenalin rush of the instrumentally virtuosic vocal writing and show-stopping arias performed by a cast including Gianluca Margheri as Bajazet, countertenor Francesco Giusti singing Tamerlano, contralto Niamh O'Sullivan is Asteria, counterteno Eric Jurenas is the Greek prince Andronicus, Rachel Kelly sings the role of Irene, soprano Aoife Miskelly as Idaspe and the Irish Baroque Orchestra conducted by Peter Whelan in this Oliver Award winning production (winner of the Outstanding achievement in Opera)

In our Sunday concert two piano quartets - the Gustav Mahler Piano Quartet in A minor and Richard Strauss's Piano Quartet in C minor Op. 13 played by Hyeyoon Park (violin), Timothy Ridout (viola), Kian Soltani (cello) and Benjamin Grosvenor (piano). Aedín also features a selection of recordings from featured artist Rachel Podger, who has established herself as a leading interpreter of the Baroque and Classical music periods. We'll hear her recordings of works by Vivaldi, Tartini and Bach ahead of her concert at the National Concert Hall this week.

A new series by ecologist Anja Murray and musician Brían Mac Gloinn (Ye Vagabonds) celebrates some of Ireland's native trees. Each episode in this series is a musically rich homage to the history,

ecology, music and folklore of a tree species. Brían composes and performs new songs and collates traditional tunes for each tree, weaving these into a sonic journey through science, stories, people and wildlife. Together, Anja Murray and Brían Mac Gloinn create a unique portrait of pioneering birch, adaptable willow, regenerative hazel, protective holly, strong oak and generous ash. There are interviews with master craftsmen, folklorists, archaeologists, ecologists and activists, telling the story of each tree species through the many ways in which it has infused Ireland's wildlife, and cultural heritage.

Episode 1 'Birch' reveals how this pioneering tree was one of the first trees to seed itself across the tundra like landscape of post-glacial Ireland, helping to create the rich soils we so depend on today. Brian Mc Gloinn and Anja Murray meet Michael O'Connell in Galway to find out how the tiny wind-borne seeds are perfectly adapted to colonising new ground. They explore how these characteristics are reflected in Irish folklore with Ríonach uí Ógáin, former director of the National Folklore Collection. The pair also meet Catherine Cleary of Pocket Forests to see tiny pockets of native woodland being planted up in communities in inner city Dublin. Brían and friends perform a newly composed song about Birch and several traditional tunes that reference birch.

We are delighted to be returning to the National Concert Hall, Dublin for the first in our series of Summer Lunchtime Concerts as Gavan Ring (tenor) joins the National Symphony Orchestra and conductor Killian Farrell for a programme of music by Rossini, Puccini and Mascagni. Liz Nolan presents a showcase of unabridged musical masterworks, featuring live recordings of Irish and international performers, plus selections from the latest CD releases. (Photo Frances Marshall)

Niall Carroll plays music from the heart of the classical repertoire. At midday each day Niall chooses his Five of a Kind. This week we'll hear five pieces by the Irish composer Bill Whelan.

The Full Score today features guitarist Sean Shibe as he joins the Irish Chamber Orchestra. Shibe is committed to the music of the great masters of the past and continues to expand the repertoire for his instrument by conceiving imaginative programmes featuring new music and commissions. This performance features music by Vivaldi, Elgar, Dvorak and Fennessy. Liz Nolan presents a showcase of unabridged musical masterworks, featuring live recordings of Irish and international performers, plus selections from the latest CD releases. 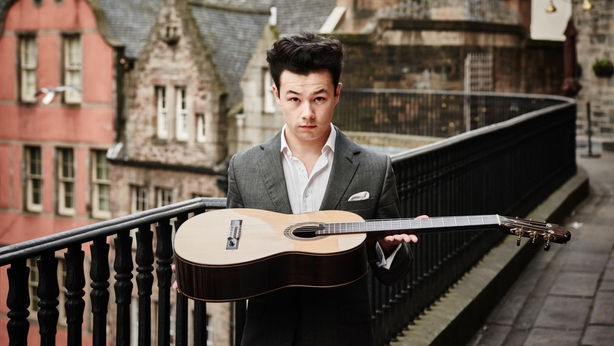 Marty is joined by playwright and director Conor McPherson, who chats about creating the musical Girl from the North Country using the songs of Bob Dylan. Conor also recalls directing Marty in his feature film debut, The Actors, alongside Alison Doody and Michael Gambon.

In advance of Dublin Pride this weekend a concert from WorldPride Copenhagen with music by Ethel Smyth, Benjamin Britten and Piotr Ilyich Tchaikovsky, composers who understood what it meant to be different either due to their gender or their sexuality. Liz Nolan presents a showcase of unabridged musical masterworks, featuring live recordings of Irish and international performers, plus selections from the latest CD releases.

Join Paul Herriott as he presents the opening concert from the West Cork Chamber Music Festival 2022. Live from the wonderful setting of Bantry House the Prague based, Pavel Haas Quartet open the concert with one of Haydn's numerous quartets, plus reflections on Janacek's love life via his String Quartet No.1 and the glorious G Major quartet by Dvorak.

Plus, we mark Pride 2022 with a concert from Copenhagen performed by soprano Sine Bundgaard and pianist Thomas Bagwell. They perform a programme of songs that thematise sexuality, identity and desire in different ways from Schubert, whose lieder portray intense relationships between men to the poet Edna St. Vincent Millay, who with the poem Wild Swans describes ultimate freedom, which she herself lived out in the bohemian milieu of the 1920s in New York