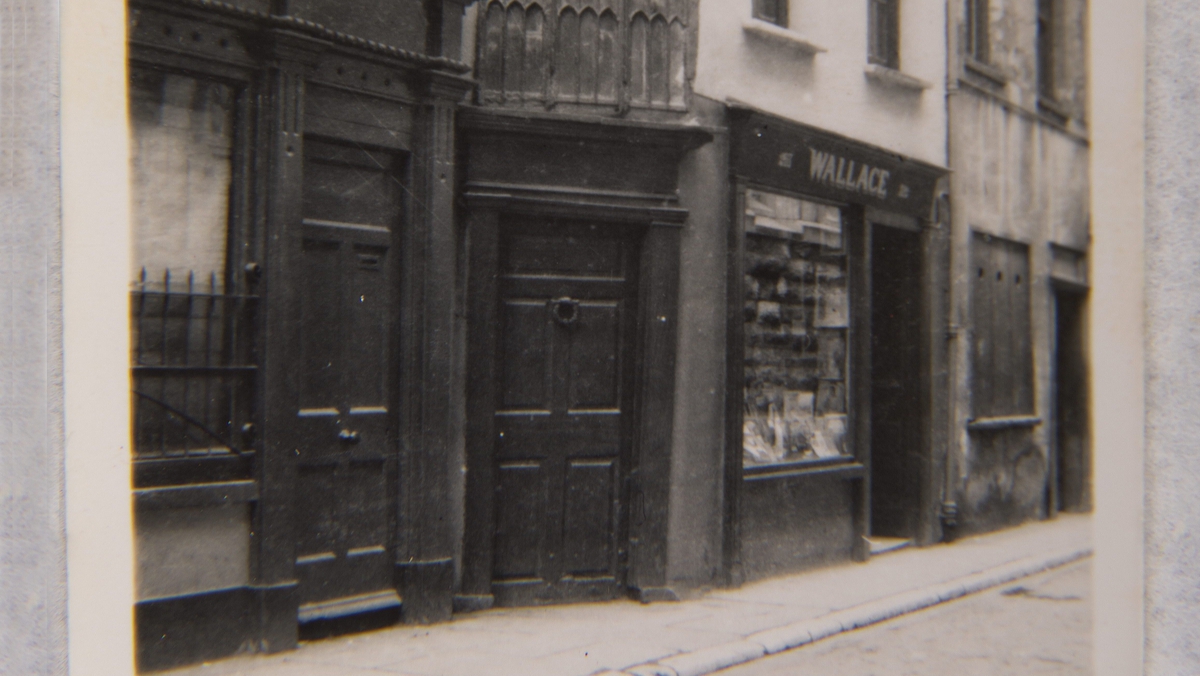 Decades ago The Wallace Sisters ran a small newsagents in Cork city. While many bought their paper and tobacco there, few knew of the secrets it held as an IRA brigade HQ during the War of Independence as these fearless sisters led a double life. (2020)

In the early decades of the last century two sisters, Nora and Sheila Wallace, ran a small newsagents in the centre of Cork City. However, their customers were unaware that when they bought their Irish Times or Cork Examiner, that this small shop also traded in military secrets during the Irish War of Independence – from deciphering codes, to spy handling, and keeping the inventory of armaments for the Cork No. 1 Brigade, Irish Republican Army.

Sheila and Nora Wallace grew up in rural north Cork, before coming to live and work in Cork City in the 1900s where they rented the premises on Brunswick Street (now St Augustine's Street) in the centre of the city. On the very narrow street in the shadow of the large St Augustine's Church, the shop sold newspapers, sweets, cigarettes, magazines and religious items such as statues and rosary beads.

Over the shop the sisters lived in small, meagre quarters. Interested in nationalist and socialist ideals, Sheila and Nora became friendly with figures such and James Connolly and Countess Markievicz. Because of their deep-rooted sense of nationalism, they also came to know prominent local nationalist figures in Cork such as Tomás McCurtain, Terence MacSwiney, Florence O’Donoghue, Seán O’Hegarty, as well as Michael Collins.

As the nationalist movement gained more popularity throughout Ireland, the Wallace Sisters became deeply involved with the Irish Volunteers. After the shutting down of the Cork Volunteers headquarters in Sheares Street in 1917, the Wallaces’ small shop became more than a meeting place for the leadership of the Cork Volunteers. It was essentially the Brigade headquarters where the intelligence and communications activities in the city and county were co-ordinated during the War of Independence.

Records show that Sheila became a Staff Officer in the IRA, making her one of the highest female rank holders in the organisation at the time. Meetings of Cork No. 1 Brigade leadership were held in the kitchen at the back of the shop, where raids and ambushes were planned. Dispatches went through the shop for IRA operations. Spies in the Crown forces were recruited and handled by the Wallaces and British Army codes were deciphered by them. They also kept meticulous records of the armaments and equipment held by the Brigade, effectively acting in the role as quartermasters.

In The Little Shop of Secrets, Bill Murphy – grandnephew to Sheila and Nora Wallace – pieces together the remarkable story of two young women who placed their lives in grave danger by running an intelligence centre, safe house and spy network from their little shop in the centre of Cork City during the War of Independence, right under the noses of the Royal Irish Constabulary and British Crown forces.

Special thanks to the staff at Cork Public Museum, and the staff at the Military Archives in Cathal Brugha Barracks, Dublin.

More information on the Wallace Sisters can be found in the Shandon Area History Group's publication "Ordinary Women in Extraordinary Times - Eleven Cork Women in the Revolutionary Years".