The dramatic FBI raid on Donald Trump's palatial Florida residence has supercharged the bitter, polarising political debate around the slew of judicial investigations facing the former US president as he considers another White House run.

Yesterday's shock action marked a stunning escalation of legal probes into the 45th US president, drawing cheers from his political foes and condemnation from his allies.

"Nothing like this has ever happened to a President of the United States before," the 76-year-old Mr Trump said of the day-long FBI search of his luxury Mar-a-Lago resort.

He denounced the FBI raid as "prosecutorial misconduct" and "weaponisation of the Justice System" by "Radical Left Democrats who desperately don't want me to run for President in 2024".

The FBI declined to provide a reason for the unprecedented move against a former president.

But multiple US media outlets said federal agents were conducting a court-authorised search related to the potential mishandling of classified documents that had been sent to Mar-a-Lago after Trump left the White House in January 2021.

Mr Trump has also been facing intense legal scrutiny for his efforts to overturn the results of the 2020 election and the 6 January attack on the US Capitol by his supporters.

Since taking his last Air Force One flight from Washington to Florida on 20 January last year, Mr Trump has remained the country's most divisive figure, continuing to sow falsehoods that he actually won the 2020 vote.

Leading Republicans quickly rallied around the former president, who was not present at Mar-a-Lago when the raid took place, while top Democrats reacted cautiously or withheld comment.

"The Department of Justice has reached an intolerable state of weaponised politicisation," said Kevin McCarthy, a California lawmaker who is seeking to become the speaker of the House of Representatives if Republicans win back the chamber in November's midterm elections.

"Countless times we have examples of Democrats flouting the law and abusing power with no recourse," Ms McDaniel said. "Democrats continually weaponise the bureaucracy against Republicans."

Republican Senator Lindsey Graham, a close Trump ally, said "launching an investigation of a former President this close to an election is beyond problematic".

After denouncing the raid in a lengthy statement yesterday evening, Mr Trump's team put out a fund-raising message today asking "every single red-blooded American Patriot to step up" and donate to fight what he called "this NEVERENDING WITCH HUNT". 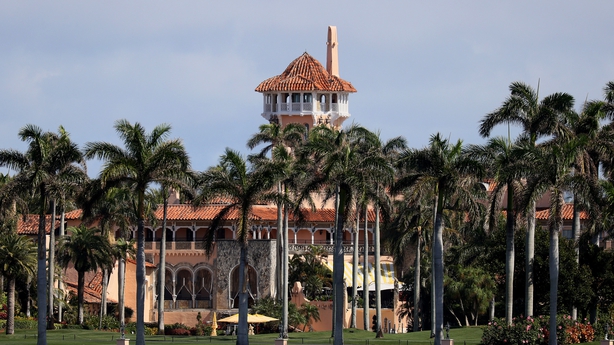 Mick Mulvaney, former member of Congress and acting Chief of Staff in the Trump White House, has said that the FBI raid is "worse than Watergate".

Speaking on RTÉ's Drivetime, he said that at the moment it's "all speculation" and he called on authorities to come forward and tell the public what it was they were looking for and whether they found it.

He said that the other investigation is political in nature and has very little real legal authority, but this was a major escalation of the authorities' investigation into the former president.

On allegations that Mr Trump did not properly comply with technical legal obligations when he left the White House, such as submitting documents used, he said this was an important law not to break and has penalties, but it did not compare to charges of overturning the government.

"We don't know why they did it, what they were looking for or what if anything they found ... at this point as nobody has any evidence," he said.

He said that the politically charged nature of this investigation is so intense that half of the US will assume this is politically motivated, with Mr Trump being guilty until proven innocent.

Mr Mulvaney said that the Department of Justice was contributing to that, adding that the department needs to come out and explain why and how it got involved in this investigation.

He said that the department got the search warrant on very short notice, as officials thought something was there that would go away if they didn't go and take it.

He said that Mr Trump not running again would be a "difficult charge" as a result of this as the US has felons serving in Congress, so he thought it would be a "real stretch".

He said it would be a bridge "very far" for the democratic Department of Justice to cross.

Mr Mulvaney said that he never saw Mr Trump ripping up documents and throwing them in the toilet as had been reported by members of staff to the New York Times.

He said that everyone automatically assumed that there is something serious here, and he agrees with that, saying that the Department of Justice wouldn’t go after small things.

Mr Mulvaney added that Mr Trump's comparing this to Watergate was more than fair as this is more serious than that, as a private residence was never raided. He said that this was unprecedented and was the "exact opposite" of Watergate as it is a legal investigation but that authorities are going further against Mr Trump than they did back then.

Dan Scavino, Mr Trump's former social media manager, urged him to accelerate an announcement that he would run again.

Nancy Pelosi, the Democratic speaker of the House, was asked about the raid during an appearance on NBC. "No person is above the law," she said, "not even a former president of the United States".

In his statement, Mr Trump did not give any indication about why the FBI raided his home but said "they even broke into my safe!"

Andrew McCabe, a former deputy director of the FBI, said he believed the bureau may have been looking for "something specific" related to its probe into the alleged mishandling of classified information.

The National Archives said in February that it had recovered 15 boxes of documents from Mar-a-Lago and asked the Justice Department to look into Mr Trump's handling of classified information.

The recovery of the boxes raised questions about Mr Trump's adherence to presidential records laws enacted after the 1970s Watergate scandal that require Oval Office occupants to preserve records.

Speaking on CNN, Mr McCabe said "there had to be a suspicion, a concern and indeed specific information that led (the FBI) to believe that there were additional materials that were not turned over".

Mr Trump's former communications director Alyssa Farah Griffin told CNN that the raid could fire up his supporters, a small number of whom rallied outside Mar-a-Lago today.

"If it's seen as some sort of massive overreach and not something incredibly serious, this is a very good day for Donald Trump," Ms Farah Griffin said.

For weeks, Washington has been riveted by hearings in Congress about the 6 January storming of the Capitol by Trump supporters and his attempts to overturn the election won by Democrat Joe Biden.

Attorney General Merrick Garland has been been careful not to tip his hand when asked whether the Justice Department is building a legal case against Mr Trump over the Capitol riot.

"No one is above the law," Mr Garland has said, while adding recently that he intends to "hold accountable every person who is criminally responsible for trying to overturn a legitimate election".

Mr Trump is also being investigated for his efforts to alter the 2020 voting results in the state of Georgia, while his business practices are being probed in New York in separate cases, one civil and the other criminal.