Cuba has sought to bring under control a fire at its main oil storage facility that has killed one firefighter, drawing on help from Mexico and Venezuela to fight the raging flames.

A lightning strike on Friday ignited one of eight storage tanks at the Matazanas super tanker port 60 miles east of Havana. A second tank caught fire on Saturday, catching firefighters and others at the scene by surprise. Sixteen people were missing.

The second explosion injured more than 100 people, many first responders, and 24 remain hospitalised, five of those in critical condition.

"We are facing a fire of such magnitude that it is very difficult to control in Cuba, where there are not all the means that are required," Cuban President Miguel Diaz-Canel told reporters. 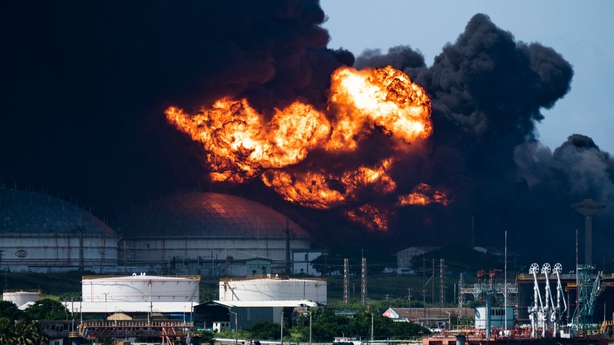 "The help is important, I would say that it is vital and it is going to be decisive," Mr Diaz-Canel said. Cuba had been using water and helicopters to battle the flames.

Jorge Pinon, director of the University of Texas at Austin's Latin America and Caribbean Energy and Environment Program, said each tank at the facility could store 300,000 barrels and provided fuel to electric plants.

Cuba has been suffering daily blackouts and fuel shortages. The loss of fuel and storage capacity is likely to aggravate the situation, which has spurred small local protests in the last few months.