The latest TV debate between Conservative leadership candidates fell off air after a "medical issue" and a crashing sound was heard.

Foreign Secretary Liz Truss looked shocked and walked away from her lectern before the debate coverage was halted.

The Sun had been hosting the debate on Talk TV with questions from readers and presenter Ian Collins later said there had been a "medical issue'.

The BBC were reporting that the host, Kate McCann, had collapsed in the studio. The debate will not resume this evening.

The broadcaster said in a statement: "Kate McCann fainted on air tonight and although she is fine, the medical advice was that we shouldn't continue with the debate".

"Relieved to hear @KateEMcCann is fine," Ms Truss tweeted around an hour after the incident.

"Really sorry that such a good debate had to end," she said.

Mr Sunak also took to Twitter to call it "good news" that the moderator was said to be feeling better.

"It was a great debate and I look forward to getting grilled by you again shortly!" he added.

The event had already been hit by misfortune after The Sun's political editor Harry Cole was forced to withdraw as a co-moderator earlier today after testing positive for Covid-19.

Before it went off air, the candidates had been asked about the NHS by a cancer patient and former chancellor Rishi Sunak said that the rise in national insurance would ensure funding.

He also said he did not think it was unfair to ask big business to pay more through Corporation Tax increases.

However, Ms Truss said the economy is predicted to go into recession under current policies.

She pointed out it was a Conservative manifesto promise not to raise national insurance contributions.

She added that the corporation tax rises would make Britain less competitive, with a rate ten points higher than Ireland.

There was a small invited audience with questions and one woman asked if she had to become a vegetarian as she could not afford meat.

Ms Truss said food could be cheaper if farmers faced less regulation, while Mr Sunak said the government should work with farmers to ensure that no one was taking advantage.

The break in coverage occurred as Ms Truss was talking about the necessity of standing up to Russian President Vladimir Putin. 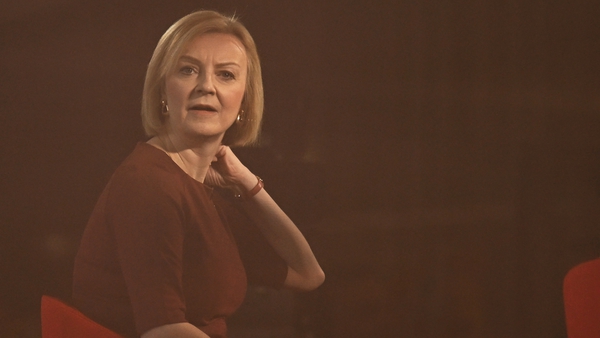