Russia's defence ministry says that 959 Ukrainian soldiers have surrendered since Monday at the plant, which has become a symbol of Ukrainian resistance to Russian forces.

Speaking to reporters in Mariupol, the leader of the breakaway Donetsk People's Republic, Denis Pushilin, said there had been about 2,000 fighters in the sprawling industrial complex and "a little more than half" remained inside.

"Commanders and high-ranking fighters of (the) Azov (regiment) have not yet come out," he told journalists, including from AFP, on a press tour organised by the Russian military.

The Azov regiment, a former paramilitary unit created in 2014, has integrated into the Ukrainian armed forces. Russia describes the unit, which has previous links to far-right groups, as a neo-Nazi organisation.

Last month Russia claimed control of Mariupol after a weeks-long siege, but hundreds of Ukrainian soldiers remained holed up in underground tunnels beneath the huge Azovstal industrial zone.

Mr Pushilin said the forces inside the plant were running out of supplies and had been left with little choice but to surrender.

Russia's defence ministry said that 80 wounded were among those who had surrendered since Monday and that some were being treated in a hospital in the town of Novoazovsk in Russian-controlled territory.

Mr Pushilin said some of the wounded were also being treated in the city of Donetsk and that the rest of those who emerged from the plant were being held under guard in a prison colony.

Today, Russia's defence ministry posted videos of what it said were Ukrainian fighters receiving hospital treatment after surrendering at the besieged Azovstal steel works in Mariupol.

In one video, a group of men were shown lying on beds in a room, and two spoke briefly to camera. One said he had access to food and doctors, while the second said he had been bandaged and had no complaints about his treatment.

In a second video, a man with a head wound said he was being well fed and looked after, and was not under any physical or psychological pressure.

It was not possible to establish if the men were speaking freely.

Meanwhile, Kyiv is hoping to exchange the Ukrainian fighters, but Russia has yet to confirm whether they will be part of a prisoner swap.

Mr Pushilin suggested some of the Ukrainians could face trial.

"As for war criminals and those who are nationalists, if they lay down their weapons their fate will be in the hands of the court," he said.

Kyiv's defence ministry has said it would do "everything necessary" to rescue those still in the steelworks, but admitted there was no military option available.

Nearly 700 more Ukrainian fighters surrendered at the Mariupol steelworks in the past 24 hours, according to Russia, but leaders reported to still be holed up inside, are delaying the final end of Europe's longest and bloodiest battle for decades.

Finland and Sweden meanwhile formally applied to join NATO, bringing about the very expansion that Russian President Vladimir Putin has long cited as one of his main reasons for launching the "special military operation" in February.

Russia's ministry of defence said the surrender of 694 more fighters meant a total of 959 people had now laid down their arms at the vast Azovstal steelworks - last bastion of Ukrainian defenders in the city.

The Ukrainian defence ministry, which has so far confirmed only about 250 having left the plant, did not immediately respond to a written request for comment.

The final surrender of Mariupol would bring a close to a near three-month siege of the once prosperous city of 400,000 people, where Ukraine says tens of thousands of civilians died under Russian siege and bombardment, many buried in mass graves.

Kyiv and Moscow had both said yesterday that around 250 people left the plant, giving little clue as to the fate of hundreds more believed to be inside.

Ukrainian officials have spoken of hopes to arrange a prisoner swap for Mariupol defenders they describe as national heroes. Moscow says no such deal was made for fighters it calls Nazis.

The Kremlin says Mr Putin has personally guaranteed the humane treatment of those who surrender, but high-profile Russian politicians have publicly called for them never to be exchanged, or even for their execution. 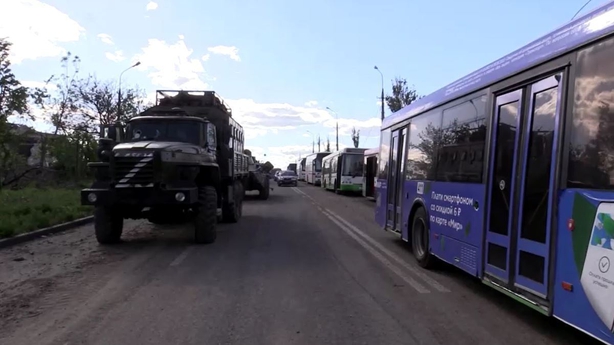 The Swedish and Finnish ambassadors handed over their NATO membership application letters in a ceremony at the alliance's headquarters.

"This is a historic moment, which we must seize," NATO Secretary-General Jens Stoltenberg said.

Ratification of all 30 allied parliaments could take up to a year, diplomats say.

Turkey has surprised its allies in recent days by saying it had reservations about the new prospective members, especially their tolerance of Kurdish militant groups on their soil.

Mr Stoltenberg said he thought the issues could be overcome. Washington has also played down the likelihood that Turkish objections would halt the accession.

Finland, which shares a 1,300km border with Russia, and Sweden were both militarily non-aligned throughout the Cold War, and their decision to join the alliance represents the biggest change in European security for decades.

In a stroke, it will more than double the alliance's land border with Russia, give NATO control over nearly the entire coast of the Baltic Sea and put NATO guards just a few hours drive north of St Petersburg.

After weeks in which Russia threatened retaliation against the plans, Mr Putin appeared to abruptly climb down this week, saying in a speech on Monday that Russia had "no problems" with either Finland or Sweden, and their NATO membership would not be an issue unless the alliance sent more troops or weapons there.

The steelworks surrender in Mariupol allows Mr Putin to claim a rare victory in a campaign which has otherwise faltered. Recent weeks have seen Russian forces abandon the area around Ukraine's second larges city Kharkiv, now retreating at their fastest rate since they were driven from the north and the Kyiv environs at the end of March.

Nevertheless, Moscow has continued to press on with its main offensive, trying to capture more territory in the Donbas region of southeastern Ukraine which it claims on behalf of separatists it has supported since 2014.

Mariupol, the main port for the Donbas, is the biggest city Russia has captured so far, and gives Moscow full control of the Sea of Azov and an unbroken swathe of territory across the east and south of Ukraine.

The siege was the deadliest battle in Europe at least since the wars in Chechnya and the Balkans of the 1990s.

The city's months of resistance became a global emblem of Ukraine's refusal to yield against a far better-armed foe, while its near total destruction demonstrated Russia's tactic of raining down fire on population centres.

Russia insists it had agreed to no prisoner swap in advance for the Azovstal defenders, many of whom belong to the Azov Regiment, a Ukrainian unit with origins as a far right militia, which Russia describes as Nazis and blames for mistreating Russian speakers.

"I didn't know English has so many ways to express a single message: the #Azovnazis have unconditionally surrendered," tweeted Russian Deputy Ambassador to the United Nations Dmitry Polyansky.

TASS news agency reported a Russian committee planned to question the soldiers as part of an investigation into what Moscow calls "Ukrainian regime crimes".

Leonid Slutsky, one of Russia's negotiators in talks with Ukraine, called the evacuated combatants "animals in human form" and said they should be executed.