The Chinese megacity of Guangzhou has cancelled hundreds of flights and launched mass testing of 5.6 million people after one suspected Covid case, as the battle to contain the coronavirus sweeps across the country.

China is facing its worst outbreak since the peak of the first wave in early 2020, with eastern Shanghai recording dozens of daily deaths and the capital Beijing sealing off whole neighbourhoods where handfuls of cases have been detected.

Under its zero-Covid policy, China has used lockdowns, mass testing and travel restrictions to stamp out infections.

The strategy is under strain, with the highly transmissible Omicron variant punching through health controls.

Rolling virus restrictions - including a weeks-long lockdown of virtually all of Shanghai's 26 million residents - have damaged the economy, causing backlogs at the world's busiest container port, a key node in the global supply chain.

Guangzhou, a major trade and manufacturing hub in southern China, announced mass testing today for almost a third of its near 19 million residents after an "abnormal" test result was detected at its airport, where most flights have been cancelled.

Meanwhile, the tech hub of Hangzhou near Shanghai late yesterday ordered 9.4 million downtown residents out of its 12.2 million population to get tested every 48 hours if they want to access public spaces and transportation.

The aim is "that the virus has nowhere to hide or settle", the city government said in a statement, raising fears of further restrictions across a city home to some of China's biggest companies. 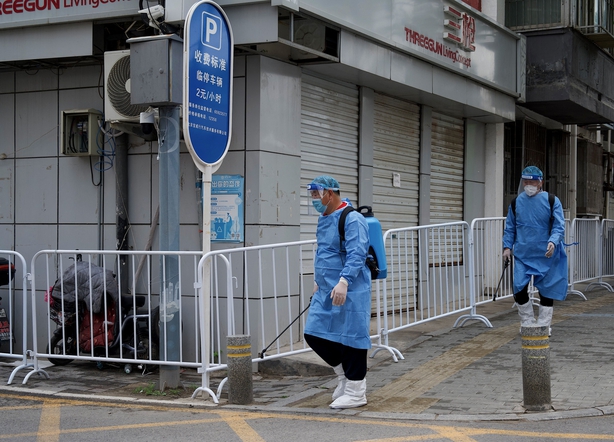 China has reported 11,367 new infections, a small daily tally compared with most major global economies, but enough to rattle authorities in the country where the coronavirus was first detected in late 2019, but that had until recently emerged relatively unscathed by the pandemic.

Over 10,000 of those cases were detected in Shanghai, where cases are trending downwards after a weeks-long lockdown which has enraged residents and seen rare protests against a government accused of bungling the response and failing to feed people confined at home.

The city is waging a campaign to reach "zero-Covid at the community level" - meaning no transmissions outside locked-down areas.

Around 50 new cases were found in Beijing, the seat of government for President Xi Jinping, who has until now hailed China's virus response as an example of the superiority of the country's Communist leadership.

The capital launched mass testing of nearly all its 21 million residents this week and locked down more housing compounds in its populous Chaoyang district.

Residents are on high alert of a potential wider lockdown, with large gatherings, group travel and weddings suspended and some schools moving online.