Israel carried out its first air strike on the Gaza Strip in months early on Tuesday, in response to a rocket fired from the Palestinian enclave after a weekend of violence around a Jerusalem holy site.

The army also said its special forces had made five arrests overnight in the occupied West Bank, which has seen a string of deadly Israeli raids since an uptick in attacks and demonstrations four weeks ago.

Tensions have focused on the highly contested Al-Aqsa mosque compound, known to Jews as the Temple Mount, in Jerusalem's Israeli-annexed Old City.

Palestinian worshippers gathering there for Ramadan prayers have been outraged by visits by religious Jewish under heavy Israeli police protection - as well as restrictions on their own access.

Jews are allowed to visit the site at certain times but prohibited from praying there.

The violence, coinciding with the Jewish Passover festival as well as the Muslim holy month, has sparked fears of a repeat of last year's events, when similar circumstances sparked an 11-day war that levelled parts of Gaza.

'I call on all sides to exercise maximum restraint'

The Minister for Foreign Affairs Simon Coveney said in a statement that he was "deeply concerned by the violence in Jerusalem in recent days, particularly at the Al Aqsa compound".

He said he supported calls from the UN Special Coordinator "for provocations to cease immediately", adding that "further casualties must be prevented".

Minister Coveney said: "I would like to acknowledge Jordan's important role as custodian of the holy sites in Jerusalem. The status quo at these sites must be respected and freedom of worship guaranteed.

"Israel, as the occupying power, must ensure that its security forces exercise the utmost care to preserve civilian life. I call on all sides to exercise maximum restraint and continue to engage in de-escalatory efforts.

"I condemn all acts of terrorism, including the firing of rockets from Gaza into Israel."

On Monday, warning sirens sounded after a rocket was fired into southern Israel from the blockaded enclave, controlled by the Islamist group Hamas, in the first such incident since early January.

The Israeli military said that the rocket had been intercepted by the Iron Dome air defence system.

Hours later, the Israeli air force said it had hit a Hamas weapons factory in retaliation.

Hamas claimed to have used its "anti-aircraft defences" to counter the raid, which caused no casualties, according to witnesses and security sources in Gaza. 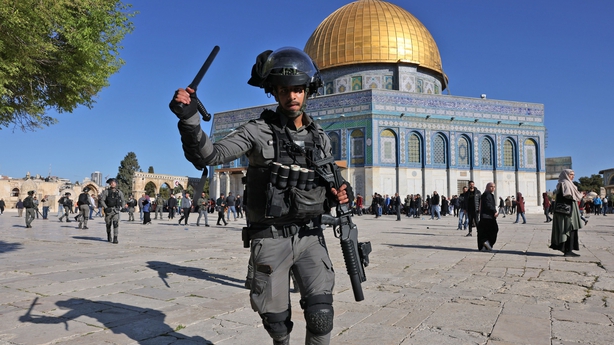 No faction in the crowded enclave of 2.3 million inhabitants immediately claimed responsibility for the rocket.

But it comes after weeks of mounting violence, with a total of 23 Palestinians and Arab-Israelis killed, including assailants who targeted Israelis in four deadly attacks.

Those attacks claimed 14 lives, mostly civilians, according to an AFP tally.

The rocket fire also followed a weekend of Israeli-Palestinian violence in and around the Al-Aqsa mosque compound that wounded more than 170 people, mostly Palestinian demonstrators.

Diplomatic sources said the United Nations Security Council was to meet on Tuesday to discuss the spike in violence.

Israeli police said they had refused to authorise a march which Jewish nationalists had planned around the walls of the Old City.

A similar parade last year, following a similar wave of violence, was interrupted by rocket fire from Gaza which in turn triggered an 11-day war.

That conflict killed at least 260 Palestinians, including many fighters, and 14 people on the Israeli side, including a soldier.

This month has also seen violence in the West Bank.

The Palestinian Red Crescent said on Tuesday it had treated 45 people following a demonstration in the village of Burqa, against a march by Israeli settlers demanding the re-establishment of a nearby settlement evacuated in 2005.

Incidents at the Al-Aqsa mosque compound, the holiest site in Judaism and the third-holiest in Islam, have triggered repeated rounds of violence over the past century.

Hamas has vowed to defend Al-Aqsa's status as "a pure Islamic site".

But analysts have said in recent weeks that the movement does not want a war at present, partly because its military capacities were degraded by the last one.

They say Hamas is also wary that a new conflict could prompt Israel to cancel thousands of work permits issued in recent months to residents of impoverished Gaza, where unemployment is near 50%.

But Islamic Jihad, another Palestinian faction which Israel says has thousands of fighters and rockets in the enclave, said on Monday that "the enemy's threats to cut off aid to Gaza will not force us into silence over what is happening in Jerusalem".

US State Department spokesman Ned Price said on Monday that the United States was "deeply concerned" about the tensions and that senior US officials had been in touch by telephone with their counterparts from Israel, the Palestinian Authority and Arab governments.

"We have urged all sides to preserve the historic status quo" at the Al-Aqsa compound and avoid "provocative" steps, he said.