An occupation of Canada's capital by truckers opposed to vaccine mandates gained steam as it entered its second week on Saturday.

Increased numbers of demonstrators took to the streets of Ottawa, while protests kicked off in several other cities.

In the capital, protesters huddled around campfires in bone-chilling temperatures and erected bouncy castles for kids outside Parliament, while waving Canadian flags and shouting anti-government slogans.

The atmosphere appeared more festive than a week earlier, when several protesters waved Confederate flags and Nazi symbols and clashed with locals.

Police, who were out in force and errected barriers overnight to limit vehicle access to the city centre, said they were bracing for up to 2,000 protesters - as well as 1,000 counter-protesters - to join hundreds of truckers already jamming Ottawa's streets.

But organisers of the so-called Freedom Convoy told AFP they expected their numbers to swell into the tens of thousands.

Similar protests were happening in Toronto, Quebec City and Winnipeg. And in southern Alberta province, truckers blocked a major border crossing to the US state of Montana.

With public anger rising - thousands of residents have complained of harassment by protesters, and an online petition demanding action has drawn 40,000 signatures - Sloly vowed to crack down on what he called an "unlawful" occupation of the city.

But he offered no timeline.

No end in sight

Reached for comment by AFP, protest coordinator Jim Torma said the protesters would not back down.

"They're not going to hide us," Torma said. "We're going to be in (politicians') faces as long as it takes" to force an end to public health restrictions aimed at slowing the spread of Covid-19.

Kimberly Ball, who with her husband drove five hours from a small town west of Toronto to join the Ottawa protest, told AFP, "It's about our freedom."

Holding back tears, she said, "A couple of people we know, friends, also lost their jobs because of these (vaccine) mandates."

Ball has had Covid and said she questions whether the vaccines are safe and effective.

She is, however, in the minority in Canada, where 90 percent of adults are fully vaccinated. 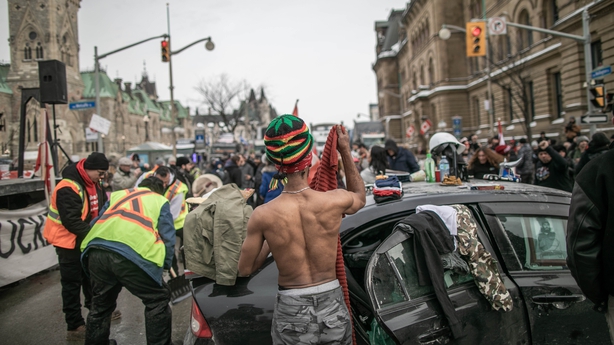 The Freedom Convoy started on Canada's Pacific coast in late January and picked up supporters along the long trek to the capital - as well as more than 10 million Canadian dollars in online donations.

The number of protesters in Ottawa had peaked last Saturday at several thousand before dwindling to a few hundred by midweek, officials said.

The protest has received support from tech magnate Elon Musk and former US president Donald Trump, who in a statement on Friday called Prime Minister Justin Trudeau a "far left lunatic".

The Canadian prime minister has said the protesters represent only a "fringe minority," though polls show one-third of Canadians support the call to lift all Covid restrictions.

The leaders of two Western provinces, Jason Kenney of Alberta and Scott Moe of Saskatchewan have added their voices to the anti-mandate push.

"There are many jurisdictions around the world that have adopted more common-sense travel protocols than we have now in place in Canada," Kenney said on Friday.

Moe, meanwhile, announced an imminent lifting of all pandemic restrictions in Saskatchewan, despite pushback from doctors.

Vaccine mandates and most other Covid measures are the responsibility of provincial authorities in Canada.

Ottawa residents, however, are fed up with the chaos the protests have brought to their streets.

On Friday, a class action was launched against the truckers on behalf of residents who said they had been heckled, yelled at to remove their masks and intimidated by honking that measured ear-popping decibels and made sleep near-impossible.

"The Class Members are living in daily torment," reads the court filing, which seeks Can$9.8 million in damages.

Late Friday, GoFundMe removed a Freedom Convoy fundraiser from its website after receiving evidence from law enforcement that the demonstration "has become an occupation, with police reports of violence and other unlawful activity".