President Volodymyr Zelensky has called on the West to avoid creating "panic" in the face of the Russian troop build-up on Ukraine's border.

He pointed to the need to "stabilise" Ukraine's already battered economy as he insisted he saw no greater threat now than during a similar massing of Russian troops last spring.

The attempts by the Ukrainian leader to tamp down tensions come as some Western allies - spearheaded by the United States - have warned of a potentially imminent invasion by Moscow.

"The greatest risk for Ukraine... is the destabilisation of the situation inside the country," Mr Zelensky said.

The West says Russia has deployed over 100,000 troops and heavy armour along Ukraine's borders and threatened massive sanctions if the Kremlin stages an incursion.

The US, Britain and Australia recently angered Kyiv by ordering the families of diplomats to leave their embassies in Ukraine.

Ukraine has been fighting a conflict with Russian-backed separatists in the east of the country since 2014 that has cost over 13,000 lives. Moscow seized the Crimea peninsula the same year.

Russia says it wants peace but has 'gun on table' - US

Russia says it does not want war but has placed a "gun on the table" in its negotiations with the United States by massing troops on Ukraine's borders, US Ambassador to Moscow John Sullivan has said.

In an online briefing from Moscow, Mr Sullivan described the build-up of tens of thousands of Russian troops as "extraordinary" and said it could not be explained as an ordinary military exercise or exercises.

"It's the equivalent of if you and I were having a discussion or a negotiation. If I put a gun on the table and say that I come in peace, that's threatening," Mr Sullivan said.

"And that's what we see now.

"We hope that the Russian government is true to its word, and does not plan to, and will not, further invade Ukraine. But the facts suggest that it has the present ability to do that," he added. 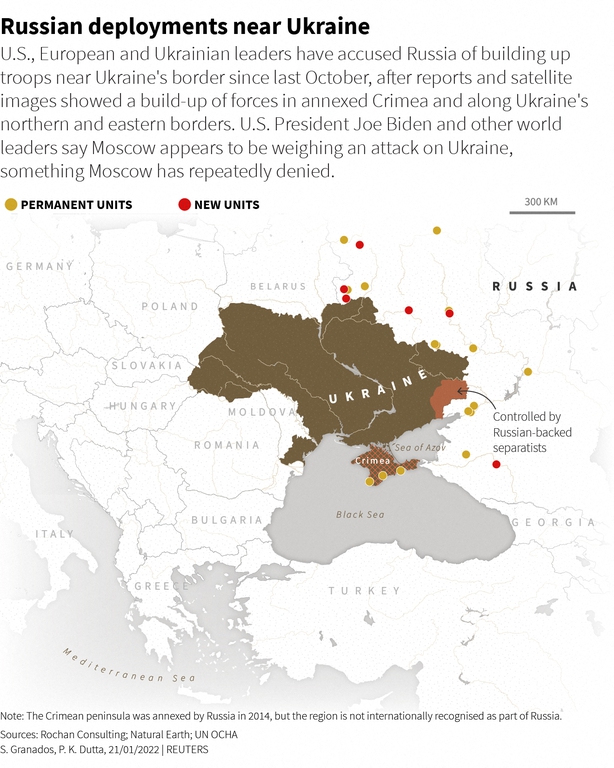 Moscow has massed troops near Ukraine and has sought security guarantees from the West, including a promise that NATO will never allow Russia's former Soviet neighbour to join.

Mr Sullivan said Washington was now waiting for Russia's response to written documents by the United States and NATO sketching a diplomatic path out of the Ukraine crisis, and urged Russia to withdraw troops from near Ukraine's borders.

He said those documents contained ways to calm the crisis with proposals for greater transparency around military drills in Europe, as well as on Ukrainian arms sales.

"We've addressed the possibility of reciprocal transparency measures with the Russian government, including on offensive weapons systems in Ukraine, as well as measures to increase confidence regarding military exercises and manoeuvres in Europe," Mr Sullivan said. 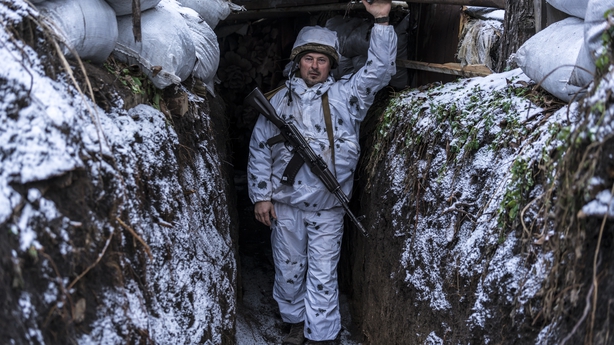 He said he hoped phone conversations or a physical meeting between American and Russian diplomats could then follow, reiterating that diplomacy was the only way forward.

Mr Sullivan also said economic sanctions on Russia after an invasion of Ukraine would be just one part of the West's response.

Other measures would include export controls and greater defence of allies in Europe, and the United States would also prevent the Nord Stream 2 natural gas pipeline from Russia to Germany from operating, he said.

US President Joe Biden and his European Union counterpart Ursula von der Leyen have pledged to cooperate on guaranteeing Europe's energy security as well as Ukraine's amid the standoff triggered by Russia amassing troops at Ukraine's border.

"The United States and the EU are working jointly towards continued, sufficient, and timely supply of natural gas to the EU from diverse sources across the globe to avoid supply shocks, including those that could result from a further Russian invasion of Ukraine," they said in a joint statement.

The European Union depends on Russia for around a third of its gas supplies. Any interruptions to Russia's gas supply to Europe would exacerbate an existing energy crisis caused by a shortage.

The US has been in talks with major energy-producing countries and companies around the world over a potential diversion of supplies to Europe if Russia invades Ukraine, senior Biden administration told reporters earlier this week.