Olympic running greats came together today to bid farewell to Kenyan star Agnes Tirop, whose murder earlier this month sent shockwaves across the nation and the athletics world.

A double world championships bronze medallist tipped for future stardom on the track, Ms Tirop was buried in a white casket in central Kenya on what would have been her 26th birthday.

Her body was found on 13 October with stab wounds in the bedroom of her home in Iten, a high-altitude training hub for top-class athletes.

Ms Tirop's husband appeared in court this week as a suspect in her killing after being arrested and remanded in custody.

Many in the congregation wore the signature red shirts of Athletics Kenya, which described Ms Tirop as a "jewel" and one of the fastest-rising stars on the international running circuit. 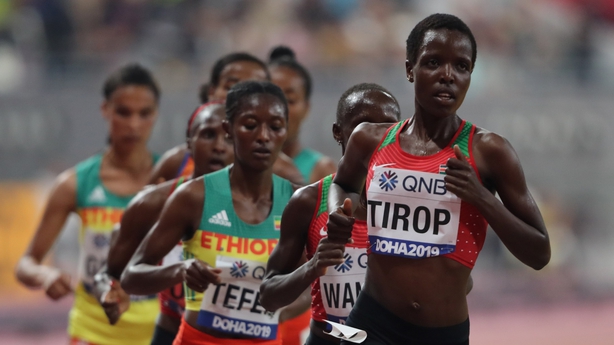 Her death sparked outpourings of grief and condolences from Kenyan President Uhuru Kenyatta, but also anger at a life taken so young.

Impassioned speakers at her funeral demanded swift justice for Ms Tirop, and huge crowds marched in Eldoret on Friday calling for an end to violence against women.

Ms Tirop's death has thrown a spotlight on the pressures faced by the country's female athletes who pay a huge price for their spectacular success in a male-dominated society.

"The injustice against female athletes here in Kenya is a threat to all of us athletes all over the world," said Olympic 5000 metres champion Mr Cheptegei.

"We are here in solidarity to show that we condemn such acts in such a manner."

Athletics Kenya announced today that the Kenyan leg of the World Cross Country Tour would be named after Ms Tirop.

Born to a poor farming family, Ms Tirop launched her athletics career less than a decade ago, but swiftly ran up a host of second-place finishes in national and international cross-country races.