Outgoing German Chancellor Angela Merkel dropped a hint for political leaders to overcome their differences, as talks between the parties to choose her successor got under way, following last week's election.

Speaking at celebrations in the eastern city of Halle to commemorate German reunification in 1990, Ms Merkel said the country once again had the opportunity to shape its future.

"We can argue over exactly how in the future, but we know that the answer is in our hands, that we have to listen and speak with each other, that we have differences, but above all things in common," she said.

"Be prepared for new encounters, be curious about others, tell your own histories and tolerate differences," Ms Merkel said. "That is the lesson from 31 years of German unity."

In what was billed as perhaps her last major speech as chancellor, Germany's long-serving leader seemed to deliver a message to the politicians haggling to form the next government.

Ms Merkel will leave office after 16 years in power once a new coalition can be formed after the outcome of last week's election in which her coalition partners, the Social Democrats (SPD) came out on top. 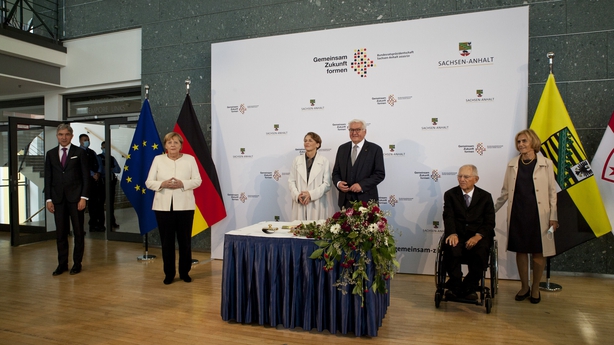 The SPD and its candidate Olaf Scholz narrowly won last week's vote on 25.7%, with Merkel's CDU-CSU alliance plunging to an all-time low of 24.1% under the beleaguered leadership of Armin Laschet.

The two parties begin talks with the Greens and liberal FDP, with which they need to strike an agreement to grab the top job for themselves.

"We sometimes take our democratic accomplishments too lightly," Ms Merkel said in her speech, asking the public to "reject radicalisation", referring to a neo-Nazi attack on a synagogue in the city where she was speaking two years previous.

"Diversity and difference" were not threats to society, Ms Merkel added, as Germany had shown in the years since the fall of the Berlin Wall.

The veteran politician, who lived in the communist east before reunification, was visibly moved as she described her own struggles with prejudice and called for more "respect" for the personal histories of east Germans.