Almost all of the mostly Haitian migrants who had gathered on both sides of the US-Mexico border have left their makeshift camps, ending a standoff that had provoked a major border crisis for the Biden administration.

At Ciudad Acuna on the Mexican side, AFP reporters saw migrants packing up their belongings and getting into vans taking them to a shelter, after a deal struck with the Mexican government.

Just hours beforehand the US had announced that the last of the migrants who were camping illegally under a bridge on the Texas side of the border had either left or been removed.

"As of this morning, there are no longer any migrants at the camp underneath the Del Rio bridge," Homeland Security Secretary Alejandro Mayorkas told reporters at the White House.

Around 2,000 were flown to Haiti on 17 expulsion flights, Mr Mayorkas said, while "others have been moved to processing facilities along the border".

"Many of them will be returned to Haiti from there," he said.

The Homeland Security chief said an estimated 8,000 had voluntarily returned across the border to Mexico, some 12,400 individuals will have their cases heard by an immigration judge, and another 5,000 are being processed to determine if they will be removed or not.

In Ciudad Acuna, city council secretary Felipe Basulto said migrants currently at the shelter would not be detained or deported, and that they could move around the city "with complete confidence".

He said they would be able to try and resolve their immigration status while at the shelter, which is being administered by the National Migration Institute "precisely so that they can offer them an alternative of legally staying in the country".

The relocation came hours after Mexican President Andres Manuel Lopez Obrador said he did not want his country to become "a migrant camp".

"We want the underlying problem to be addressed," he said, urging the US to invest in economic development in Central America so people do not need to flee poverty. 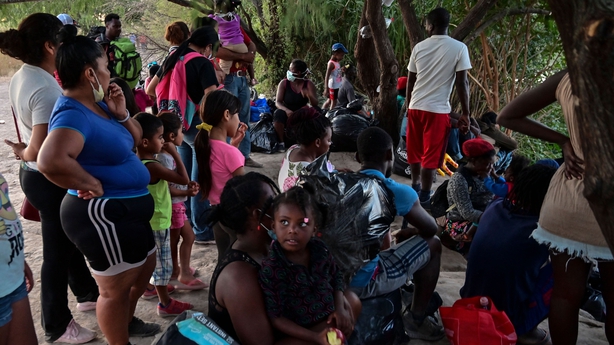 Despite the camps' emptying, some Haitians continued to arrive in the US city of Monterrey yesterday.

"If I find work to live here, to support my family, I have no problem staying," Joseph Yorel told AFP.

The sudden appearance of thousands of desperate Haitians, who travelled through much of Latin America to reach the United States, has caused a major headache for President Joe Biden's administration.

The issue was brought into sharp relief after uproar over photos of confrontations between border patrol officers on horseback and Haitians on foot.

Showing officers wielding long leather reins and dressed in some cases in clothing reminiscent of Westerns, the photos for many evoked distressing images of vigilante justice or even the US slavery era. 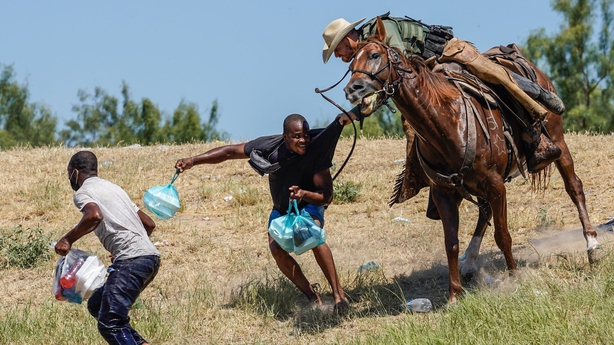 In his first comments on the disturbing images, Mr Biden said it was "outrageous" and promised "consequences".

"It was horrible... to see people treated like they did: horses nearly running them over and people being strapped," Mr Biden said. "It's outrageous. I promise you, those people will pay."

"An investigation is under way now, and there will be consequences," he added.

Biden in a bind

Mr Biden took office in January vowing to reverse what he called his Republican predecessor Donald Trump's inhumane policies at the southern border.

Mr Trump, who regularly warned that US borders were being overwhelmed and claimed falsely that immigrants were bringing large-scale crime and disease, focused much of his presidency on promises to control the frontiers.

Mr Biden finds himself in a bind eight months into his presidency, with huge numbers of would-be migrants being apprehended after crossing illegally from Mexico, including 200,000 people in August.

The government had allowed some of the more vulnerable migrants to register and enter the United States.

However, many of the Haitian migrants were ordered to be flown immediately back to Haiti, the country they had fled in some cases years earlier.

The US special envoy to Haiti resigned in protest on Thursday, citing the "inhumane, counterproductive decision".

Democrats accuse Mr Biden of reneging on his promises, pointing to his decision to retain tough deportation rules, something the White House says is required due to Covid-19 restrictions.

At the same time, Mr Biden is hammered daily by Republicans and the Fox News network which portrays the southern border as out of control and the White House as surrendering American security.