Democratic US Senate leader Chuck Schumer has urged President Joe Biden to end mass deportations of Haitian migrants, with the White House facing a firestorm of criticism over its buckling immigration system and the apparent abuse of refugees.

Border patrol agents are struggling to stem a massive influx of undocumented migrants, thousands of them from Haiti, in a mounting crisis described by one Republican senator as a "monumental disaster" for the Biden administration.

US Customs and Border Protection has said the "majority" will be expelled under Title 42, a policy from Donald Trump's administration that stopped most arrivals at the southern border on the grounds that migrants could spread Covid-19.

"I urge President Biden... to immediately put a stop to these expulsions, and to end this Title 42 policy at our southern border," Mr Schumer said on the Senate floor. 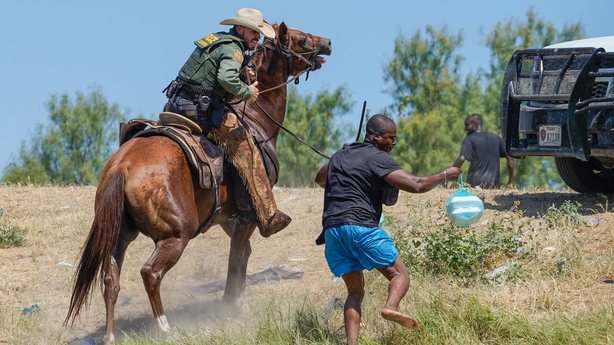 "We cannot continue these hateful and xenophobic Trump policies that disregard our refugee laws."

Washington began over the weekend to send planeloads of Haitian nationals back to their crisis-wracked country, hit by a devastating recent earthquake and political turmoil.

The crisis intensified after pictures by AFP photographer Paul Ratje that spread quickly over social media appeared to show riders swinging their reins to threaten migrants and push them back toward the Rio Grande river.

Asked at the United Nations General Assembly in New York for his reaction to the disturbing images, Mr Biden told reporters: "We will get it under control."

Vice President Kamala Harris told reporters she was "deeply troubled" by the pictures, while the UN itself has voiced concern at the deportations, warning that people with serious asylum claims may be at risk.

Homeland Security Secretary Alejandro Mayorkas said the mounted officers captured in the images were trying to manage the flow of hundreds of migrants crossing the Rio Grande from Mexico near Del Rio, Texas. 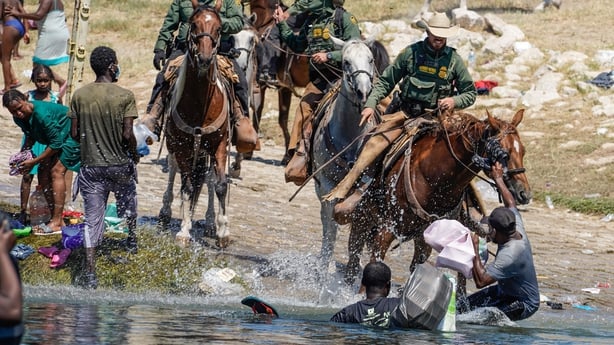 Mr Schumer rebuked the government, which has pledged to investigate, for treating refugees merely trying to escape tyranny with "unimaginable" indignity.

"This behaviour must be addressed and we must provide accountability. The images turn your stomach," he said.

Mr Biden promised a more humane approach to immigration than Trump, but he has faced mounting political pressure to swiftly address the crisis from both Republicans and his fellow Democrats.

The deportation of Haitian migrants was temporarily suspended by Washington after a devastating earthquake hit the Caribbean nation last month.

But they resumed after more than 15,000 Haitians crossed into the United States in recent days from Mexico and found themselves stranded for days in Texas under a bridge spanning the Rio Grande.

Mr Mayorkas told senators Haitian migrants had been receiving fake information about being able to stay in the United States as refugees under "temporary protected status" due to the recent political turmoil sparked by the assassination of President Jovenel Moise.

More than 3,000 migrants have already been removed from a makeshift camp in Del Rio, to be transferred to detention centres or deported, Mr Mayorkas said.

"We have increased the number of repatriation flights to Haiti and to other third countries. The size of the population in Del Rio Texas has diminished considerably," he said.

But moderate Utah Republican Mitt Romney described the Biden administration's border and immigration policies as "nothing short of a monumental disaster." 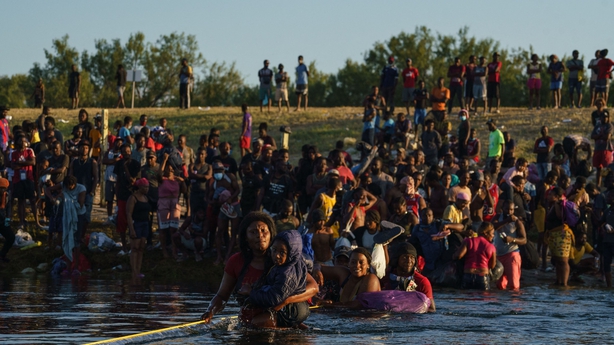 In the Senate hearing, fellow Republican Josh Hawley told Mr Mayorkas: "You and your administration are responsible for tens of thousands of people living in conditions that are startling, brought here because of your policies."

Texas Governor Greg Abbott told a news conference in Del Rio the chaos was due to the Biden administration's "open border policies" attracting people from more than 150 countries.