The FBI is searching the home of Gabby Petito's boyfriend Brian Laundrie after the body of a woman matching her description was discovered yesterday.

The body was found in a US national forest in Wyoming, where a search was under way for Gabrielle "Gabby" Petito.

US authorities launched a massive search for the 22-year-old when her family filed a missing person report on 11 September, after she mysteriously vanished during a road trip with her boyfriend.

The FBI confirmed on Twitter today that it is "executing a court-authorized search warrant today at the Laundrie residence in North Port, Florida, relevant to the Gabrielle 'Gabby' Petito investigation."

It added: "No further details can be provided since this is an active and ongoing investigation."

#UPDATE: The #FBI is executing a court-authorized search warrant today at the Laundrie residence in North Port, FL relevant to the Gabrielle "Gabby" Petito investigation. No further details can be provided since this is an active and ongoing investigation. @FBIDenver pic.twitter.com/uxrtVNIZ4u

"Full forensic identification has not been completed to confirm 100% that we found Gabby, but her family has been notified of this discovery," he said, adding that cause of death had not been determined.

The FBI and other law enforcement had been searching for Ms Petito in a national forest in the western state of Wyoming, where the couple was when Ms Petito last communicated with her parents in late August, according to her family.

"I would like to extend Sincere and heartfelt condolences to Gabby's family," Mr Jones added.

"We ask that you all respect their privacy as they mourn the loss of their daughter."

Ms Petito quit her job and packed her life into a camper van for a cross-country adventure in July with her boyfriend Brian Laundrie, 23, documenting their journey in a stream of idyllic-seeming Instagram posts. 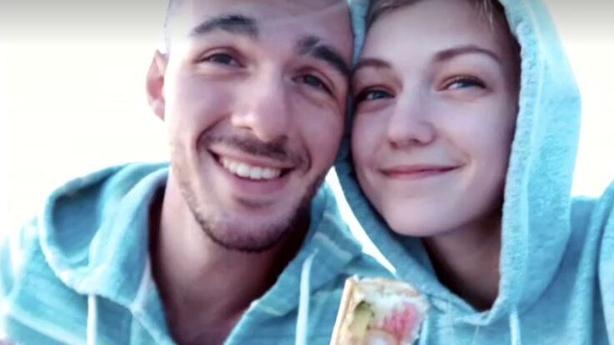 Mr Laundrie was declared a "person of interest" in the case and declined to cooperate with police. The mystery deepened after Mr Laundrie also went missing.

On Friday, North Port police said Mr Laundrie's parents claimed they had not seen their son for several days.

In a statement, the police underscored that while he was a person of interest, "he is not wanted for a crime".

In the wake of the FBI announcement, the North Port police tweeted the force was "saddened and heartbroken" by the news.

"Our focus from the start, along with the FBI, and national partners, has been to bring (Petito) home. We will continue to work with the FBI in the search for more answers."

The couple embarked on their journey across the US from New York on the East Coast, posting photos of views of the American west and the two of them smiling happily next to their small white van.

In one YouTube video published during their trip, Ms Petito and Mr Laundrie are shown kissing tenderly, enjoying a sunset together and strolling on a beach.

However, in August, police in Utah responded to a domestic violence report involving the couple.

Police body cam footage published by US media shows a distraught Ms Petito saying she had had an altercation with Mr Laundrie.

Speaking to a police officer after their van was pulled over, Ms Petito is seen crying and saying she struggles with mental health problems.

Ms Petito said she slapped Mr Laundrie after an argument, but added that she meant no harm.

"We've just been fighting this morning, some personal issues," she said. "He wouldn't let me in the car before ... he told me I needed to calm down."

Mr Laundrie told police that Ms Petito tried to get the van keys from him and he pushed her before she hit him with her phone.

The police officer decided no charges would be brought, but ordered the couple to spend a night apart to calm down.

The search for Brian Laundrie continues Sunday morning in the Carlton Reserve. A team of more than 50 looking for anything of note after his parents say this is where he went. We continue to corroborate all info in the search for him and Gabby. 1-800-CALL-FBI. pic.twitter.com/20nt70mezz

News of Ms Petito's disappearance sparked a flood of calls to help find her on social media.

Her father, Joe Petito, appealed for anyone with information on her whereabouts to contact the authorities, adding that an anonymous tip line had been set up.

Mr Jones said public response for a request for tips had been "remarkable", and that investigators continue to seek information related to the couple.