Journalist Sayed Farid Sanai left his home country of Afghanistan and came to live in Ireland in 2019. Here, in his own words, he tells his story of the haunting images of war back home.

I am Sayed Farid Sanai from Afghanistan. I have known nothing but war.

I was born during it, I grew up with war raging around me, and my country still burns in its fire. And I don't know when it will end.

According to statistics, during the 40 years of war, more than two million people have been killed, millions of refugees have been created, hundreds of thousands of people have been left disabled, and women and children have become orphans and widows.

People in Afghanistan dream of peace but that dream has been lost for years.

Since 2019 I have been living in Ireland but before that I worked with the Afghan media for more than eight years as a news anchor.

Of course, I witnessed suicide bombings many times, when I was only a few metres away from the explosion and saw this sad and inhuman story with my own eyes

I think now that these days were the best times of my life. I was the voice of my people against oppression - I was the terror of the terrorists.

Journalism in an environment like Afghanistan can be difficult especially if you are an emotional person like me.

Before presenting the news, normally I went to the editing room to see what the headline of that day was.

Most days, powerful suicide bombings and explosions took place in Kabul and other provinces of Afghanistan, killing dozens of innocent people.

Unfortunately, most days the editing room felt like a morgue, as we watched footage from the aftermath of the latest blast, listening to the cries of victims' relatives looking for the bodies of those killed.

The bloodiest attack took place in Kabul on the sixth day of Ramadan in 2017. A suicide bomber struck at 8.30am on Wednesday, 31 May, at the Zanbak intersection in Wazir Akbar Khan district.

It killed 150 people and injured about 400, the deadliest in 16 years. Mohammad Nazir, an employee of the BBC office in Kabul, was also killed and four BBC journalists were injured in the attack.

Most of the reporters came straight from the scene in dirty and even bloody clothes and with tired and pale faces. They would prepare their reports for the news.

Loading the footage of the incident into their computers and recounting the heart-breaking narrative of that day.

Watching the video footage with the sound of the crying and wailing of the victims and survivors made me feel bad. It hurt my soul and psyche as if I was there.

Of course, I witnessed suicide bombings many times, when I was only a few metres away from the explosion and saw this sad and inhuman story with my own eyes.

I always longed for the day when I would not witness the killing of men, women and children by terrorists

This tragic narrative has become almost a part of Afghan life. And this unnecessary war has been sacrificing my people for many years.

We never had good news for the people - only bad, heart-breaking news. It was very difficult for me to present unpleasant news at the end of every single day.

I felt ashamed to start the news every day with the killing and wounding of dozens of innocent people.

Many times, I got very upset and cried as I made my way back home after presenting such terrible news. 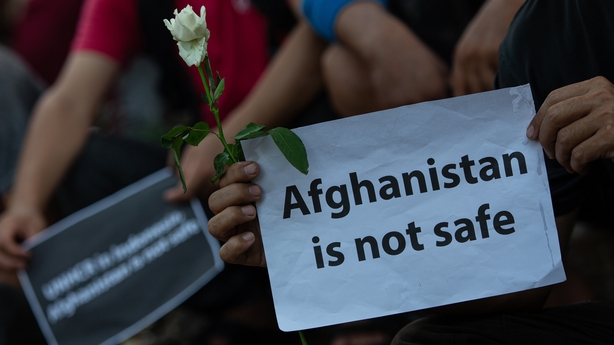 I was affected by the fact that I could not do anything to change the situation in my country. I could only pray for myself and my people.

I was withdrawn and troubled by the ongoing situation. That's how I felt for much of my life.

I followed the news of other countries. When the newsreader started reading the headlines, there were no suicide bombings - there was even some good news for their nations.

This was my wish for my country. I always longed for the day when I would not witness the killing of men, women and children by terrorists.

In the two years that I have lived in Ireland, to be honest, I am only physically here. During this time, more than ten of my media colleagues have been assassinated for doing their jobs.

These targeted assassinations by the armed opposition and other terrorist groups in Afghanistan are a wake-up call because they suppress the voice of freedom of expression.

I have often thought to myself - I want to focus on my personal life and that of my family. I want to get it out of my head because it is so hard thinking about what is happening in Afghanistan.

I still see all the injustice and oppression that my people suffer.

Recent developments, with the sudden withdrawal of US forces from Afghanistan and the failure of the United Nations to impose sanctions on Pakistan, which sponsors the Taliban and other terrorist groups in Afghanistan, leave a dangerous and serious crisis.

The Taliban have taken control of many of Afghanistan's cities in recent days. I really worry about the future of my people and I'm very afraid of the Taliban and the oppression they bring but I still support the Afghan government.

My people are at least practising the rights that we have fought for in different periods at the present time. The Taliban ignored these rights during their rule.

They did not recognise the high status of human dignity, which is highly emphasised in Islam. Thus, there is a serious conflict between the Taliban and civil rights.

Afghans have learned from the past. We now have a legitimate government and we practise the values we have achieved in the last 18 years.

During this time, the empowerment of Afghan women has increased. Around half of the Afghan workforce is female, so to have an Afghanistan with a bright future, the role of women must be considered.

It scares me to think of the Taliban coming back and stopping girls from being educated and working outside the home.

The Taliban have to meet the standards of the 21st century and accept the demands of the younger generation. But the current oppression by the Taliban in Afghanistan worries me.

They are much more dangerous than before. It is hard to imagine that man is so cruel and dangerous. They do not live in 2021. Their thoughts and ideology are not compatible with any religion.

The world should not leave Afghanistan alone.

As a young man who studied for many years, I have a master's degree. How can I live under the banner of a government that does not know the most basic issues of Islam and humanity and teaches me religion.

They do not believe in any human rights. Women are flogged in public, a person is put on a field trial, and a human life is ended for no reason.

I don’t know where human rights are and what the duty of the UN is? The whole world is silent regarding Afghanistan and we cannot forget this.

Nowhere in Islam does it say that a living person should end his life and killing a human being can never be forgiven by God.

Yet the Taliban encourages suicide bombings and they kill tens and hundreds of innocent people every day. They are the enemies of humanity and the religion of Islam. This savagery has not come anywhere in Islam.

Being an immigrant has advantages and disadvantages. You get to know the culture and language of another country and you learn a lot.

I have always tried to be in the community where I live - to be a useful person for that community and to respect the laws and think of that country as my country.

Although I have travelled to many Asian and European countries, I honestly love Ireland and its people.

If there was peace in Afghanistan and a good government in place, I would like to bring my Irish friends there to visit my Afghan friends and loved ones. And establish a good relationship between Afghanistan and my second country, Ireland.