Within seconds of the explosion, it was clear that the size and scale of the blast in Beirut's port last year was unlike anything Lebanon, which endured a 15-year civil war ending in 1990, had seen before.

Even as Beirut residents began to absorb the shock of what had happened to their city, the questions began as to what could have caused it?

Was it a bomb blast or a rocket attack? Who was responsible?

Wednesday 4 August will mark one year since the one of the largest non-nuclear explosions ever recorded ripped through the port area of the Lebanese capital.

More than 200 people died in the disaster with thousands injured and huge damage to vital port infrastructure as well as buildings across Beirut.

In any country, the task of rebuilding would be daunting. In Lebanon, a country in the middle of one of the worst financial and political crises in modern times, it seems impossible. 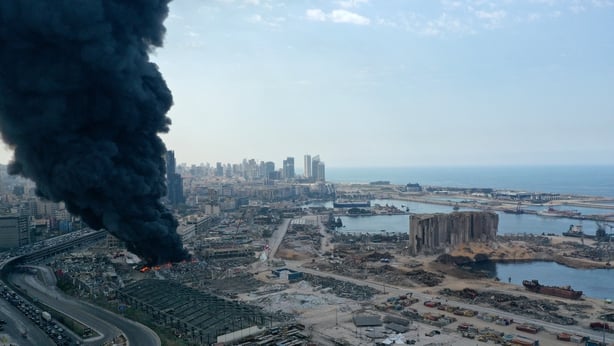 The blast happened when a large shipment of ammonium nitrate, a highly explosive chemical used in bombs and fertiliser, which was being stored in the port, exploded.

It had been unloaded from a ship in 2013 and stored on the site ever since. The question of why it was being stored there has still not been answered. The question of who should bear responsibility for the disaster also remains unanswered.

The families of those killed and injured in the blast are frustrated and angry that senior government officials have yet to be questioned in a formal inquiry into how the explosion happened.

The inquiry has been seriously hindered as requests sent to both Lebanon’s parliament and the government to lift immunity and allow for questioning of senior officials have either been rejected or stalled.

The magnitude of the economic depression in Lebanon risks systemic failures which could have severe regional and international repercussions.

Many families are increasingly angry at what they see as an abdication of responsibility by Lebanon’s political class.

The difficulty in questioning key people is typified by a recent request from Tarek Bitar - the judge heading the inquiry into the blast - to the head of the General Security Agency, Major General Abbas Ibrahim, asking him to appear before the investigation.

That request was turned down by the caretaker interior minister, with the major general saying that inquiry should take place "far away from narrow political considerations".

With immunity from questioning for senior officials, families have come to believe there will never be accountability for what happened.

But people like the Najjar family, who lost their three-year-old daughter Alexandra in the blast, continue to campaign for a transparent investigation, with her mother Tracy saying she deserves the truth.

In recent days, Lebanese President Michel Aoun told the public prosecutor that he was ready to give a statement about the blast if necessary.

A statement from the president’s office said "no one is above the law no matter how high up".

The speaker of the parliament also said last week that he was ready to lift the immunity of parliamentary members, which would allow them to be questioned.

But Nabih Berri did not go into any detail about exactly how or when this would be happen. Among families who have seen stalling tactic after stalling tactic, there remains scepticism about whether comprehensive questioning will come to pass.

Anger and frustration at politicians are not unusual in Lebanon and go far beyond those directly affected by the port disaster last year. The port blast, and the fallout that has come from it, has to be seen in the wider context of the huge problems Lebanon faces.

The World Bank warned in its Spring 2021 Lebanon Economic Monitor report that the Lebanese financial and economic crisis is likely to rank in possibly the top three most severe crises the world has seen since the 1850s.

The report cautioned that the magnitude of the economic depression in Lebanon risks systemic failures that could have severe regional and international repercussions, stating that "the social impact of the crisis, which is already dire, could rapidly become catastrophic".

In June of this year, the UN Deputy Special Co-Ordinator for Lebanon, Najat Rochdi, told a briefing in Geneva that between April 2019 and April 2021, the Consumer Price Index in Lebanon "has increased by more than 208%" and that the price of food and beverages had increased by a staggering 670%.

"By any standard, these trends are moving at a speed that is no less than stunning," Ms Rochdi added, saying that "for most families, the results are crippling: Over half of Lebanese people are now living in poverty".

Recent studies have shown that over 85% of families assessed by the UN have confirmed making changes to try to cope with the increased costs, which include reducing the number of meals they eat and reducing/cutting out their consumption of fruit, vegetables and meat.

As well as chronic food shortages, there are also severe difficulties accessing clean water, electricity and education as the country buckles under continuing problems.

So what are the factors that have led to this?

Added to this, or arguably causing it, is the political stalemate that remains in Lebanon. In the days after the explosion, the government resigned. A caretaker government is in place, but protracted negotiations on forming a government have stalled time and again.

A new prime minister designate has been announced. Najib Mikati is the third potential prime minister to be nominated in the last year. The businessman said he hopes to form a government soon, having secured the approval of President Aoun for most of his cabinet nominees.

With a caretaker administration saying it cannot take long-term decisions by which another government would be bound, the last year has seen a political standstill.

It’s a standstill which has also had an impact beyond Lebanon’s borders, with the European Union repeatedly saying that any offers relating to aid for Lebanon must be based around political stability and transparency.

The EU has consistently said that a new government, willing to implement reform, and reach a loan deal with the International Monetary Fund would be the basis for any significant financial assistance from the EU.

As Lebanon prepares to mark a grim anniversary, there is little confidence among many Lebanese about whether the hard decisions which need to be made, and lived by, will finally happen.

Optimism, as with so much else, is in very short supply in Lebanon.