Five people still missing a day after a huge explosion at a German chemical park are unlikely to be found alive, the site operator said, urging residents not to touch possibly toxic soot from the blast.

Two people were already confirmed dead in the incident, which also injured 31 others.

"We have no hope of finding the missing alive," said Frank Hyldmar, CEO of Chempark operator Currenta.

"Our thoughts are with the families," he added.

The cause of yesterday morning's blast at Chempark's waste incineration site in the western city of Leverkusen remains unknown, he told a press conference.

The explosion, which was heard several kilometres away and rattled the windows of nearby homes, sent a cloud of black smoke into the air.

The blast also triggered a fire in storage tanks for solvents that took firefighters hours to put out. 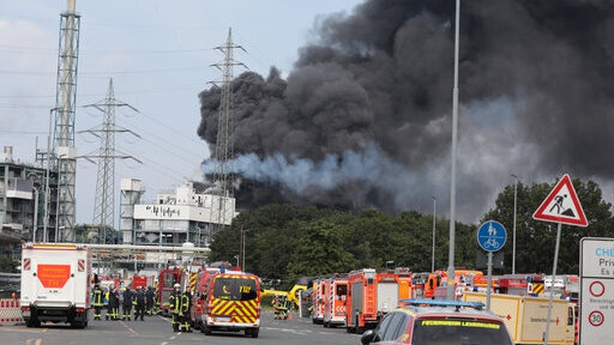 Police closed several motorways in the area and residents were told to stay indoors and shut their windows over concerns dangerous gases may have been released.

The warning remained in place for most of yesterday until city authorities said air pollution measurements had shown no abnormalities.

Experts are still probing whether soot particles that came down after the blast may be toxic, with a final report not expected for several days.

Currenta chief operating officer Hans Gennen told residents not to touch any residue they might come across and to contact the authorities so samples can be taken.

Locals have also been advised not to eat fruit or vegetables from their gardens, and playgrounds in Leverkusen's Buerrig and Opladen neighbourhoods are temporarily closed.

"We will do everything we can to get to the bottom of this terrible event," Currenta CEO Hyldmar said.

Four of the missing are Currenta employees, while the fifth works for an external company, he added.

Of the 31 injured, one is in a serious condition.

All those affected worked at the chemical park.

The area where the blast happened, in Leverkusen's Buerrig district, is a short distance away from Chempark's main industrial park that houses numerous chemical companies including Bayer, Lanxess and Evonik Industries.

A report in Der Spiegel magazine said the blast was measured as far as 40km away.