Russian rescuers continued to search today for 17 missing fishermen after their trawler capsized during a storm and sank in the freezing Barents Sea a day earlier.

The spokesman for the maritime and river transport agency Rosmorrechflot, Alexei Kravchenko, told AFP that rescuers were conducting the operation by air and sea.

"We are formally continuing the search and rescue operation," Kravchenko said, adding that two ships and an An-74 aircraft were mobilised in the area.

The comments followed reports in Russian news agencies that hope of finding the men alive - let alone their remains - had nearly gone.

A source in the emergencies ministry told the TASS news agency that rescuers had surveyed 500km sq of sea area with no results, adding that "there are virtually no chances" of finding the men.

A heavy snowstorm, huge waves and temperatures well below zero had complicated the start of the search effort yesterday.

At the time a source familiar with the details of the efforts told AFP that people can survive for no more than 15 minutes in those kind of harsh conditions. 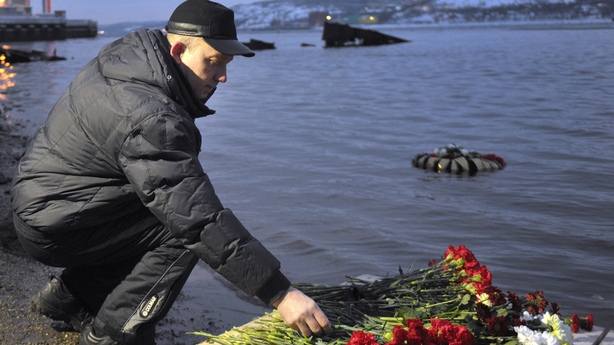 The privately-owned boat, named Onega, sank near the Novaya Zemlya archipelago in the Barents Sea early yesterday while the crew was hauling in a net.

Officials believe the Russian-flagged vessel, which had been operating since 1979, capsized after ice buildup caused it to tilt over.

Today, a source in the emergencies ministry told the RIA Novosti news agency that the fishing boat had sunk about 130 metres to the bottom of the Barents Sea and that a deep-sea vehicle is expected to arrive at the scene on Thursday morning.

Soon after the trawler capsized, a passing vessel rescued two fishermen, who saw one crew member die in front of them.

Mr Kravchenko said the two men were on board one of the search trawlers, where they will "greet New Year's".

Russian President Vladimir Putin yesterday expressed "deep condolences" to the families of the victims and offered "words of support" for the survivors.