A hearse bearing the flag-draped coffin of Argentine football legend Diego Maradona rolled through the centre of Buenos Aires as thousands of fans bade him a final farewell.

Amid blaring sirens and surrounded by motorcycle police outriders, the funeral cortege swept quickly through the streets around the presidential palace.

Thousands of fans had filed past Maradona's coffin at the palace since early morning.

The 60-year-old, who led his country to World Cup glory in 1986, died after a heart attack yesterday.

The lying in state had been extended to cope with the crowds surrounding the palace.

However, it was cut short by the family and officials after unruly fans took over an inner courtyard of the presidency. 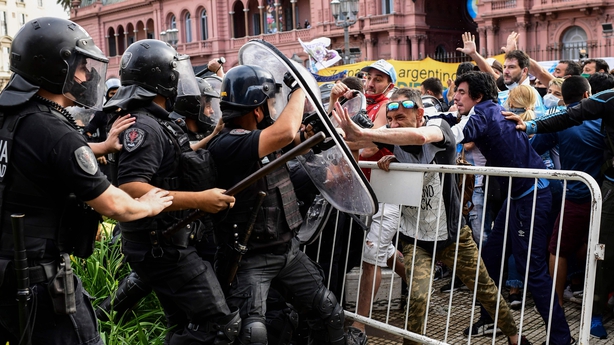 Police then clashed with fans in the city centre as the event threatened to descend into chaos.

The cortege avoided the main 9 de Julio avenue where many fans had gathered.

Instead, it sped onto a highway out of the capital, followed by dozens of photographers and cameramen on motorbikes.

Maradona is to be laid to rest at the Jardin de Paz cemetery on the outskirts of the Argentine capital after a private family ceremony.

Elsewhere, Napoli's players honoured Maradona by stepping out onto the pitch wearing his number 10 jersey ahead of their Europa League match with Rijeka. 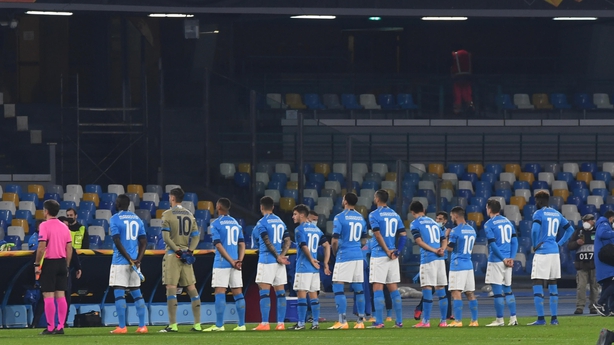 Captain Lorenzo Insigne had earlier led the tributes alongside fans gathered outside the San Paolo Stadium before the game, Napoli's first since Maradona's death.

All wearing black armbands, the team also wore Maradona's iconic jersey during the team presentation and minute's silence, under a photo projected on a large screen of the man who led Napoli to league titles in 1987 and 1990 and the UEFA Cup in 1989.

Throughout the day, supporters thronged in front of the San Paolo stadium, which could soon be renamed in honour of Maradona.

"I believe it is right to baptise the San Paolo with your name to still have you with us," wrote club president Aurelio de Laurentiis on the club's website.

A plaque was put up on the gates of the stadium which read "Diego Armando Maradona Stadium" and bore the face of the fans' Argentine hero.