French police have launched a series of raids targeting Islamist networks three days after the beheading of a history teacher who had shown his pupils a cartoon of the Prophet Mohammed.

The operation came a day after tens of thousands of people took part in rallies across the country to honour history teacher Samuel Paty and defend freedom of expression, including the right to show cartoons regarded by many Muslims as insulting.

While they were "not necessarily linked" to Mr Paty's killing, the government aimed to send a message that there would be "not a minute's respite for enemies of the Republic", he added.

Mr Darmanin said the government would also tighten the noose on non-governmental organisations with suspected links to Islamist networks, including the Anti-Islamophobia Collective.

The collective, which gathers data on anti-Muslim attacks, has accused the minister of slander.

"Fear is about to change sides," President Emmanuel Macron told a meeting of key ministers yesterday to discuss a response to the attack.

"Islamists should not be allowed sleep soundly in our country," he said.

Mr Paty, 47, was attacked on his way home from the secondary school where he taught in Conflans-Sainte-Honorine, 40kms (25 miles) northwest of Paris. 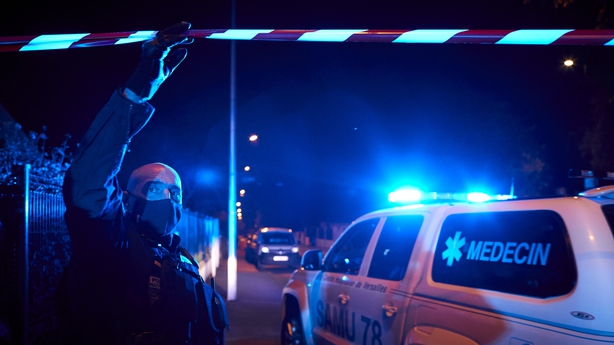 A photo of the teacher and a message confessing to his murder was found on the mobile phone of his killer, an 18-year-old Chechen man Abdullakh Anzorov, who was shot dead by police.

The killing has drawn parallels with the 2015 massacre at Charlie Hebdo satirical magazine, where 12 people, including cartoonists, were shot dead for publishing cartoons mocking Mohammed.

Mr Paty had shown his civics class one of the controversial cartoons.

According to his school, Mr Paty had given Muslim children the option to leave the classroom before he showed the cartoon in a lesson on free speech, saying he did not want their feelings hurt.

The lesson sparked a furore nonetheless and Mr Paty and his school received threats.

Eleven people are being held over his murder, including a known Islamist radical, and the father of one of Mr Paty's pupils who had launched an online campaign against the teacher.

Mr Darmanin accused the two men of having issued a 'fatwa' against Mr Paty, using the term for an Islamic edict that was famously used to describe the 1989 death sentence handed down against writer Salman Rushdie by Iran's Ayatollah Khomeini.

Mr Anzorov's family arrived in France from the predominantly Muslim Russian republic of Chechnya when he was six.

Locals in the Normandy town of Evreux where he lived described him as a loner who had become increasingly religious in recent years.

Police are trying to establish whether he acted alone. Four members of his family are being held for questioning.