Prime Minister Justin Trudeau has condemned the toppling of a statue of Canada's first prime minister in Montreal by anti-racism activists, saying a focus on improving society today, and not historical wrongs, will best advance the fight for equality.

John A Macdonald was prime minister of Canada for 19 years between 1867 and 1890, and has been applauded by historians for nation building but also criticised for the forced assimilation of indigenous peoples, described in a 2015 commission's report as "cultural genocide."

His bronze likeness, erected in the downtown Montreal park in 1895, has often been targeted by vandals over the years, but on Saturday a group of hundreds protesting against racism and police brutality tore the statue off its pedestal and decapitated it.

Mr Trudeau told a news conference he was "deeply disappointed by the vandalism that took place over the weekend."

He said he recognised the frustrations of Canadians over the slow pace of addressing systemic discrimination and racism in society, which his liberal administration has vowed to tackle.

He said: "But we are a country of laws." 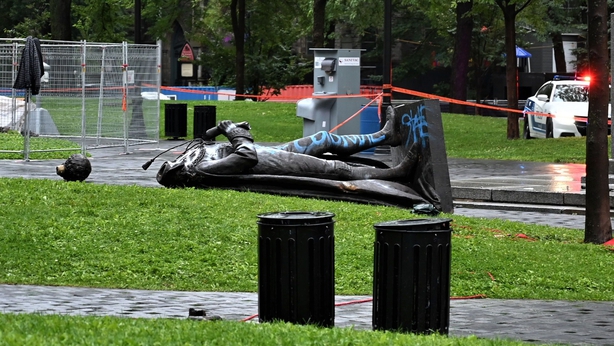 "And we are a country that needs to respect those laws even as we seek to improve and change them, and that those kinds of acts of vandalism are not advancing the path towards greater justice and equality in this country."

The destruction of the monument provoked a flurry of angry reactions, including from the premier of Alberta, Jason Kenney, who offered a new home for it in the western province, as well as nods to the protestors from many who view it harshly as a reminder of Canada's colonialist past.

Quebec Premier François Legault said: "We all agree that we must fight against racism, but at one point, it's not a democracy when we start to destroy statues like that."

"So we're going to restore it and put it back" on its pedestal, he said.

Mr Trudeau acknowledged that it is fair to question the legacies of former leaders "who surely did a lot of good things, but who also made some mistakes."

"I think the question can also be asked in relation to my father," he said, referring to Pierre Elliott Trudeau, who led a liberal government between 1968 and 1979 and then from 1980 to 1984.

He said: "We have an awful lot to do as a country (to end discrimination) and part of it needs to have a clear eye towards the past and mistakes made by previous generations of people who built this country.

"But our focus needs to be on how we improve things today and for the days to come for all Canadians."