It would have been one of the biggest and most high-profile events of his election campaign but Joe Biden won't be there.

The Democratic Convention will go ahead in Milwaukee, Wisconsin in just over a week from now.

Joe Biden had planned to travel to the venue to make a speech formally accepting his party’s nomination for president.

That won't be happening now because of coronavirus concerns and instead he will deliver his address remotely from his home state of Delaware.

Joe Biden has barely left the basement of his house since the start of the pandemic.

It is from there that he does his media interviews and hosts various virtual rallies and online fundraisers.

It is no great surprise that his in-person appearance at the Democratic Convention has been cancelled.

His low-key campaign appears to be working, with the former US vice president continuing to be the front runner in the polls, although that lead has narrowed in recent days.

Avoiding the public glare of a traditional election campaign suits Biden. He is not the best media performer or debater and can be gaffe-prone. There was a reminder of this in recent days. 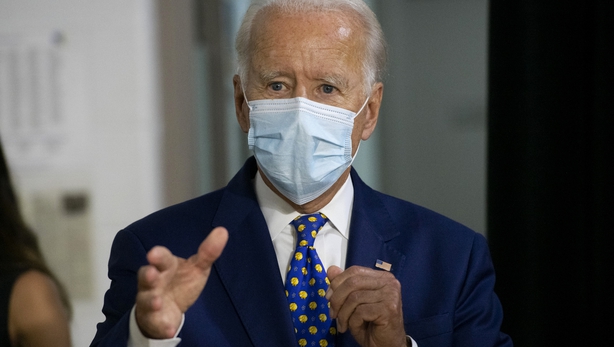 On Wednesday, he appeared to get annoyed when a reporter asked him if he had taken a cognitive test amid claims by the Trump campaign that he is suffering from some sort of mental decline.

"No, I haven't taken a test. Why the hell would I take a test?" he bristled.

"Come on, man. That's like saying you, before you got on this programme, you take a test where you're taking cocaine or not. What do you think? Huh? Are you a junkie?"

The remarks were criticised by his political opponents and a day later, the former vice president was in hot water again.

On Thursday, Mr Biden attempted to clarify comments he made earlier that day in another one of his basement interviews.

He had suggested that the African American community lacked diversity compared to the Hispanic community.

Joe Biden came under fire for the remarks from US President Donald Trump who tweeted: "Wow! Joe Biden just lost the entire African American community. What a dumb thing to say!"

In a follow-up tweet, he claimed that Mr Biden was "no longer worthy of the black vote".

It seems not even cocooning in a basement and doing pre-arranged Skype interviews is enough to protect candidates from the verbal slips and missteps that can be so common during traditional election campaigns.

Donald Trump has also had plenty of gaffes and car-crash interviews in recent weeks, but he clearly believes that he is capable of outperforming his Democratic opponent on the debate stage.

On Wednesday, the Trump campaign formally asked for an extra presidential debate that would be held early next month, before many states start sending out absentee ballots to voters.

The request was turned down by the Commission on Presidential Debates but the Trump campaign is continuing to push for the debates to start earlier claiming that by the time of the first presidential showdown on 29 September, as many as eight million Americans in 16 states will have already started voting.

Aside from the debates, Joe Biden will be very much back in the media spotlight in the coming days when he is expected to announce his choice for vice president.

The frontrunners are reported to be California Senator Kamala Harris and Susan Rice, who served as national security adviser and ambassador to the United Nations under former president Barack Obama.

Also on the shortlist are Congresswoman Karen Bass, the chair of the Congressional Black Caucus, and Congresswoman Val Demings, an African-American representative from the battleground state of Florida, who is also the former Orlando police chief.

Whoever Joe Biden chooses as his running mate will also have to deal with the realities of campaigning during a pandemic with a remote convention speech and lots of Skype interviews ahead.

Campaign managers and strategists will be keen for the vice presidential nominee to copy the Biden playbook, minus the gaffes of course.