Earth will be home to 8.8bn people in 2100, two billion fewer than current UN projections, according to a major study published today that foresees new global power alignments shaped by declining fertility rates and greying populations.

By century's end, 183 of 195 countries, barring an influx of immigrants, will have fallen below the replacement threshold needed to maintain population levels, an international team of researchers reported in The Lancet.

More than 20 countries, including Japan, Spain, Italy, Thailand, Portugal, South Korea and Poland, will see their numbers diminish by at least half.

Sub-Saharan Africa, meanwhile, will triple in size to some three billion people, with Nigeria alone expanding to almost 800m in 2100, second only to India's 1.1bn.

"These forecasts suggest good news for the environment, with less stress on food production systems and lower carbon emissions, as well as significant economic opportunity for parts of sub-Saharan Africa," said lead author Christopher Murray, director of the Institute for Health Metrics and Evaluation (IHME) at the University of Washington, told AFP.

"However, most countries outside of Africa will see shrinking workforces and inverting population pyramids, which will have profound negative consequences for the economy."

For high-income countries in this category, the best solutions for sustaining population levels and economic growth will be flexible immigration policies and social support for families who want children, the study concluded.

"However, in the face of declining population there is a very real danger that some countries might consider policies that restrict access to reproductive health services, with potentially devastating consequences," Mr Murray cautioned. 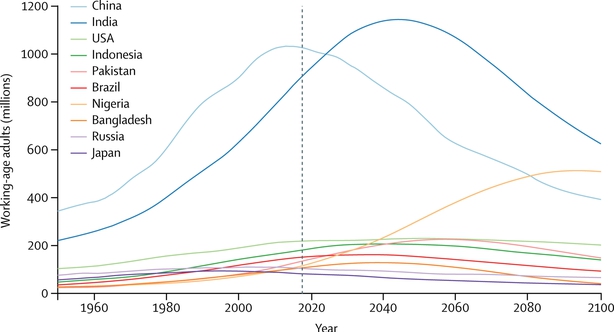 "It is imperative that women's freedom and rights are at the top of every government's development agenda."

Social services and healthcare systems will need to be overhauled to accommodate much older populations.

As fertility falls and life expectancy increases worldwide, the number of children under five is forecast to decline by more than 40%, from 681m in 2017 to 401m in 2100, the study found.

At the other end of the spectrum, 2.37bn people, more than a quarter of the global population, will be over 65 years old by then.

Sharp declines in the number and proportion of the working-age population will also pose huge challenges in many countries.

"Societies will struggle to grow with fewer workers and taxpayers," noted Stein Emil Vollset, a professor at the IHME.

The number of people of working age in China, for example, will plummet from about 950m today to just over 350m by the end of the century, a 62% drop.

The decline in India is projected to be less steep, from 762m to 578m.

In Nigeria, by contrast, the active labour force will expand from 86m today to more than 450m in 2100.

These tectonic shifts will also reshuffle the pecking order in terms of economic clout, the researchers forecast.

By 2050, China's gross domestic product will overtake that of the US, but fall back into second place by 2100, they predict.

India's GDP will rise to take the number three spot, while Japan, Germany, France and the UK will stay among the world's ten largest economies.

Brazil is projected to fall in ranking from eighth today to 13th, and Russia from the number 10 spot to 14th.

Historical powers Italy and Spain, meanwhile, decline from the top 15 to 25th and 28th, respectively.

Indonesia could become the 12th largest economy globally, while Nigeria, currently 28th, is projected to crack the top ten. 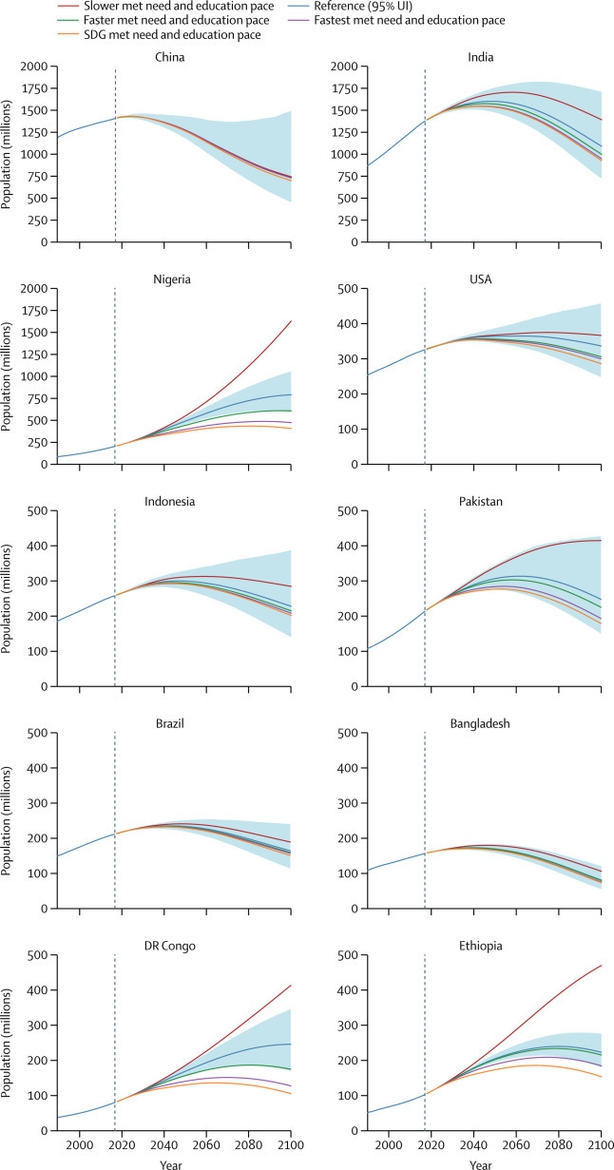 "By the end of the century, the world will be multipolar, with India, Nigeria, China and the United States the dominant powers," said Richard Horton, describing the study as outlining "radical shifts in geopolitical power".

The difference between the UN and IHME figures hinges crucially on fertility rates. The so-called "replacement rate" for a stable population is 2.1 births per woman. 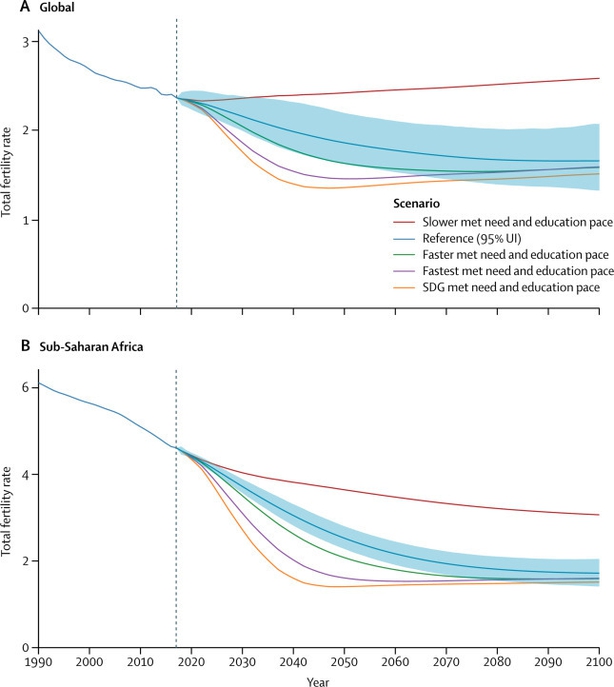 UN calculations assume that countries with low fertility today will see those rates increase, on average, to about 1.8 children per woman over time, said Mr Murray.

"Our analysis suggests that as women become more educated and have access to reproductive health services, they choose to have less than 1.5 children on average," he said.

"Continued global population growth through the century is no longer the most likely trajectory for the world's population."

Founded in 2007 and supported by the Bill and & Melinda Gates Foundation, the IHME had become a global reference for health statistics, especially its annual Global Burden of Disease reports.