South Korean President Moon Jae-in's ruling party is projected to win a parliamentary election according to exit polls, as mask-wearing voters cast their ballots under strict precautions against the novel coronavirus.

The election is being closely watched around the world as one of the first nationwide votes since the epidemic began. The coronavirus has caused delays in many other political calendars.

A ruling party majority in parliament would help Moon to push through his agenda in his final two years in office, with a looser fiscal policy aimed at creating jobs, a higher minimum wage and engagement with North Korea his priorities.

Voters at some 14,000 disinfected polling stations across the country had to wear masks, have their temperatures checked, use hand sanitiser and plastic gloves and maintain a safe distance from others.

One voter told Reuters she was initially apprehensive about coming out to vote because of the virus.

"But having come here and seen for myself, I felt it's good we voted as planned, and people are taking greater precaution about distancing," the voter said outside a Seoul polling station.

Moon's progressive camp is on track to secure up to 177 seats in the 300-member, single-chamber parliament. The conservative main opposition party is expected to win as many as 131 seats, according to exit polls conducted by TV networks.

South Korea's largely successful campaign against the coronavirus has provided an unlikely boon for Moon and his party. 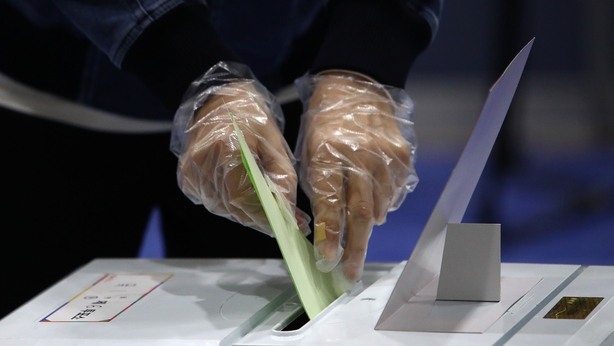 Once grappling with the first big outbreak outside China, South Korea has largely managed to bring it under control without major disruption thanks to an extensive testing campaign and intensive contact tracing.

"Though the situation is still tough, I think the government's response to the coronavirus, including its preparations for today's vote, could have helped in the election," another voter told Reuters.

Former prime minister Lee Nak-yon, who ran the ruling party's campaign, said in a televised speech after winning a key Seoul constituency that his victory was an "order from the people to do our best to tackle the coronavirus and minimise its economic impact".

The Korea Centers for Disease Control and Prevention reported 27 new coronavirus cases today, bringing the total number to 10,591. The daily tally of cases has hovered around 30 in the past week, mostly people arriving from abroad.

In all, 229 people are recorded to have died because of the coronavirus in South Korea.

Authorities have warned that infections could surge at anytime and called for special vigilance on election day.

Voter turnout of 66.2% was higher than any parliamentary elections held since 1992, according to the National Election Commission.

A boost for turnout came from record-high participation in early voting last weekend, when about 27% of 44 million eligible voters cast ballots.

Among them were about 2,800 coronavirus patients, who the NEC allowed to vote by mail or in person, using special booths.

The coronavirus hung over the campaign, forcing candidates to wear masks and bump fists instead of pressing the flesh and holding mass rallies.

More than 13,000 in self-quarantine who had signed up to vote were allowed to do so after the polls closed.

"We advised them not to use public transportation ... and disinfected the booth before the next voter comes in," said Jeon Kyung-ha, a Seoul city official.