China is reporting a surge in imported cases of Covid-19 among thousands of Chinese nationals and expats returning home as European countries lockdown.

The authorities have implemented a strict 14-day isolation for all returnees in an attempt to prevent another outbreak.

Yvonne Murray writes about her experience of home quarantine in Beijing.

Back in January, when the coronavirus swept across China, closing schools and transport, I decided to leave Beijing with the children.

We rushed to the airport, fearing flights would be suspended before we could get out.

Little did we know that we would end up making that same frantic journey in reverse, just two months later.

The plan, last week, was for the whole family to fly back to Beijing together. My husband flew out of China, where he had stayed for work, to collect us in London and we had hoped - naively - to have a few days' holiday.

But as schools closed in Europe and countries began to lock down, thousands of overseas Chinese rushed to get back home.

Airline ticket prices soared. We scrambled to find a flight and were lucky to get the last few available seats via Singapore.

But when we arrived at the check-in desk at Heathrow airport, my husband was denied boarding. Because of his recent travel history to China, he couldn't transit through Singapore.

We had a decision to make and it was just minutes until the check-in desk closed.

Do I get on that flight alone with the children?

We risked the possibility of my husband not being able to find another route back to Beijing, meaning another long separation.

Or do we all stay in London? That way, we risked the expiry of our Chinese visas. If that happened, we were unlikely to ever make it back to China.

The check-in desk called time on our flight.

We made our decision: I would get on board with the children and by the time we touched down in Singapore, we would know whether my husband had found another option.

'Why can’t we go into the garden?'

When we heard that he had, the children and I pressed on and landed in Beijing.

For hours, our plane sat on the tarmac as Chinese officials completed their checks. 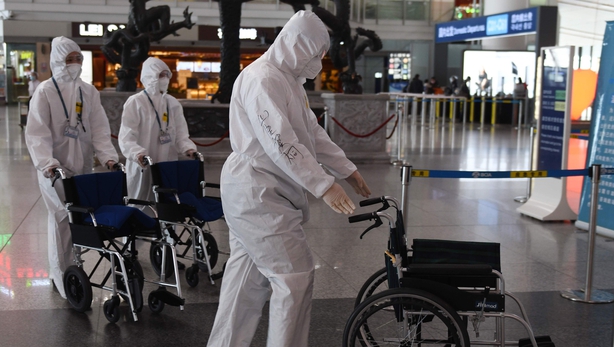 Beijing airport was staffed by people in white hazmat suits. The crowds of passengers moved slowly through the temperature checks – a sea of humanity on the run, once again, from a silent killer.

We filled in health questionnaires and signed declarations on our travel history. The process seemed to drag on forever.

By the end of it, we were in bits.

We finally arrived at the gates of our compound. A guard station had been set up and there was more paperwork to fill out - including a declaration that we would observe quarantine for 14 days.

Tears streamed down my daughter’s face - hungry, exhausted and bewildered. But we were home.

My husband arrived some time later and our quarantine began.

The children couldn't understand why we weren't even allowed into our back garden. But like millions of people across the world, we had to suddenly think up creative ways to keep them entertained indoors.

To comply with home quarantine rules, we had to test our temperatures in the morning and the evening and send the information through WeChat to our compound managers.

Every day, as I scrawled the digits on the paper record, I was gripped by a quiet terror. What would happen if one of the children developed a fever?

What if we did and were carted off to a local facility?

Who would look after the children?

"We looked out of the window one afternoon to see local officials sticking a notice across our front door and sealing it shut with tape." @yvmurray is in home quarantine in Beijing | https://t.co/OewKLBsGkP pic.twitter.com/KttKdVdT9B

Kind neighbours shopped for us. Deliveries, including piping hot dumplings from the local restaurant - the ultimate comfort food for children who've grown up in China - landed on our doorstep.

But as the days wore on, the restrictions tightened.

We looked out of the window one afternoon to see local officials sticking a notice across our front door and sealing it shut with tape.

"Dear Neighbours," the notice read, "in order to protect public health, we will observe a home-based quarantine."

We called the compound management office and asked how we were supposed to pick up our deliveries and put our rubbish bags out.

"Under the new regulations, you have no right to open your front door," they explained. It wasn’t up to them. They had to follow the government regulations otherwise the compound would not be permitted to host home quarantine.

"If you open your front door," they said, "I’m afraid we'll have to call the police."

Meanwhile, officials, most likely from the local police station, patrolled the compound, peering into the quarantined houses to make sure no rules were being broken.

From then on, we were obliged to call the management office every time we needed to open our door. A man in a hazmat suit had the job of unsealing our door, placing our supplies inside and sealing us back in.

We were instructed to stand well back and close the internal door. You can't be too careful I suppose.

The next time we ordered dumplings, they went cold on the doorstep while we waited for someone to come.

Another hazmat be-suited individual came every day to collect our bins - again sealing the door behind him.

Sometimes, we'd wave and smile out the window by way of a thank you. It' hard to tell if someone in full hazmat is smiling back. But I like to think so. 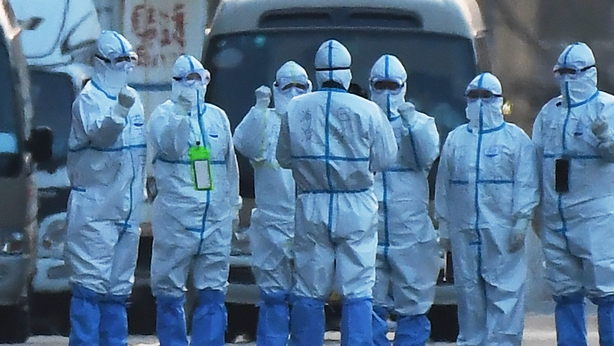 For one hour a day, the sun streams through a window of our house, lighting up the upstairs bathroom, Newgrange-style. I made the children sit for a few minutes in the little shaft of light. As they were spending 24 hours a day indoors, I reasoned, maybe some sunshine would do them good.

One morning, we noticed the house started to feel cold. We suspected the pilot light on the outside boiler needed restarting - a common problem which we usually solved ourselves in seconds, but we couldn't get out of the house to do it.

When we phoned to ask if a technician could be sent round to flick the switch, we were told it was against regulations. And so the house grew colder.

We could only hope that the weather would get warmer.

Despite the inconveniences, we considered ourselves lucky to be able to quarantine at home.

Since our arrival the rules have become stricter and many returnees have been sent to central quarantine in hotels that have been designated for the purpose - the bill charged to the individual.

Expat chat groups filled with horror stories this week of planes being diverted to provincial capitals, thousands of miles away from Beijing. Passengers reported being piled onto buses with inhuman efficiency and driven to unknown destinations. Many found themselves locked inside grim, run-down hotel rooms, not knowing how many days or weeks they would be kept there.

The Irish Embassy issued a stark warning to Irish citizens normally resident in China, not to return at this time.

All a bad dream

My eldest daughter had a dream that she saw her school friends playing outside on the street. Forgetting we were quarantined, she flung open the front door and ran out to greet them. Her younger sister followed.

Suddenly a police car swung around the corner. She managed to hide, but the policeman grabbed her sister and drove away.

As she recounted this traumatising dream, I began to wonder how the children will look back on this time.

Will they remember being cooped up inside and the worry of being taken somewhere else?

Or will they remember the time spent dancing in the sitting room after midnight, playing tiddlywinks at the kitchen table and rolling chapatti dough into funny shapes?

Maybe their memories will be more of fun than fear.

We can only hope.