Protesters took to the streets of Iran for a third day, expressing anger over the authorities' admission that they had shot down a passenger plane by accident during a confrontation with the United States.

Video from inside Iran showed riot police and protesters back out on the streets after two days of violent anti-government demonstrations.

Images of the earlier protests showed slogans against the supreme leader, with pools of blood on the streets and gunfire in the air.

Tehran has acknowledged shooting down the Ukrainian jetliner by mistake last Wednesday, killing 176 people, hours after it had fired at US bases to retaliate for the killing of Iran's most powerful military commander in a drone strike ordered by Mr Trump. 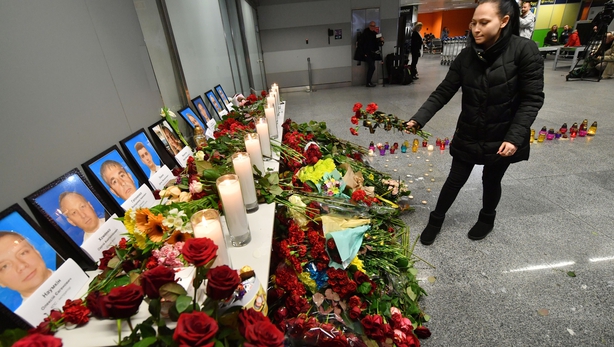 Iranian public anger, rumbling for days as Iran repeatedly denied it was to blame for the plane crash, erupted into protests on Saturday when the military admitted its role.

Iran's government denied a "cover-up" over the crash.

The Islamic republic initially denied Western claims based on US intelligence that the passenger plane had been struck by a missile before admitting it on Saturday.

"In these sorrowful days, many criticisms were directed at relevant officials and authorities," said government spokesman Ali Rabiei.

"Some officials were even accused of lying and a cover-up but, in all honesty, that was not the case," he said in remarks aired on state television.

Mr Rabiei said all details provided by officials prior to Saturday's admission had been based on the information available to them at the time.

Wounded were being carried and security personnel could be seen running with rifles.

Other posts showed riot police hitting protesters with batons as people nearby shouted "Don't beat them!"

"They killed our elites and replaced them with clerics," demonstrators chanted at a protest outside a university, an apparent reference to Iranian students returning to studies in Canada who were among those killed on the flight.

The footage has not been independently authenticated.

State-affiliated media reported the protests on Saturday and yesterday in Tehran and other cities, without giving such details.

"At protests, police absolutely did not shoot because the capital's police officers have been given orders to show restraint," Hossein Rahimi, head of the Tehran police, said in a statement carried by the state broadcaster's website.

Iranian authorities killed hundreds of protesters in November in what appears to have been the bloodiest crackdown on anti-government unrest since the 1979 revolution.

In Iraq and Lebanon, governments that have the support of Iran-backed armed groups have also faced months of hostile mass demonstrations.

Mr Trump wrote on Twitter that National Security Adviser Robert O'Brien had "suggested today that sanctions & protests have Iran 'choked off', will force them to negotiate."

"Actually, I couldn't care less if they negotiate. Will be totally up to them but, no nuclear weapons and 'don't kill your protesters'," he wrote, repeating his earlier tweets making similar calls to the Iranian authorities not to open fire.

National Security Adviser suggested today that sanctions & protests have Iran "choked off", will force them to negotiate. Actually, I couldn't care less if they negotiate. Will be totally up to them but, no nuclear weapons and "don’t kill your protesters."

Iran's government spokesman dismissed Mr Trump's comments, saying Iranians were suffering because of his actions and they would remember that he had ordered the killing in a drone strike of Qasem Soleimani, the general whose death on 3 January prompted huge mourning ceremonies in Iran over several days.

Mr Trump precipitated the escalation with Iran in 2018 by pulling out of a deal between Tehran and world powers under which sanctions were eased in return for Iran curbing its nuclear programme.

He has said the goal is to force Iran to agree to a more stringent pact.

Iran has repeatedly said it will not negotiate as long as US sanctions are in place.

The recent flare-up began in December when rockets fired at US bases in Iraq killed a US contractor.

The militia surrounded the US embassy in Baghdad for two days, and Mr Trump later ordered the strike on Gen Soleimani, who had built up Iran's regional network of allied militia.

Iran retaliated on Wednesday by firing missiles at Iraqi bases where US troops were stationed, but did not kill any Americans.

The Ukrainian plane, on its way to Kiev, crashed hours later. Most of those killed were Iranians or Iranian dual nationals. 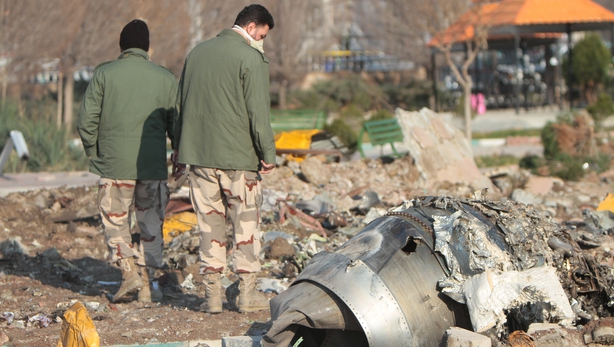 Scores were Canadians, most believed to be dual nationals who had travelled to Iran to visit relatives there.

Iran's president called it a "disastrous mistake". A top commander said he had told the authorities on the day of the crash it had been shot down, raising questions about why Iran had initially denied it.

Canadian Prime Minister Justin Trudeau told one event: "We will not rest until there are answers."

Canada's Transportation Safety Board (TSB) said it had obtained visas for two of its investigators to travel to Iran.