A British woman suffering from severe hypothermia who was revived by doctors in Spain after more than six hours of cardiac arrest has hailed her survival as "a miracle".

Audrey Marsh collapsed at around 1pm on 3 November when she and her husband were caught in a snowstorm while out walking in the Pyrenees mountains.

But it was just over two-and-a-half hours before rescue teams were able to reach them, with the 34-year-old showing no signs of life nor cardiac activity, and a body temperature of just 18C.

Initial efforts to revive her at the scene had no effect and she was flown by helicopter to a Barcelona hospital equipped with an extracorporeal membrane oxygenation machine (ECMO).

When connected to a patient's cardiac system, the ECMO takes over the functioning of the heart and lungs, oxygenating the blood outside the body then reintroducing it, allowing both organs to rest.

Similar to a heart-lung bypass machine, the ECMO has never been used in Spain for a resuscitation procedure, but by 9.45pm, her body temperature had risen to 30C and the doctors tried again to revive her, using a defibrillator.

"It is like a miracle," Ms Marsh told reporters in Barcelona at a press conference with the doctors who managed to save her at the resuscitation unit at Barcelona's Vall d'Hebron hospital. 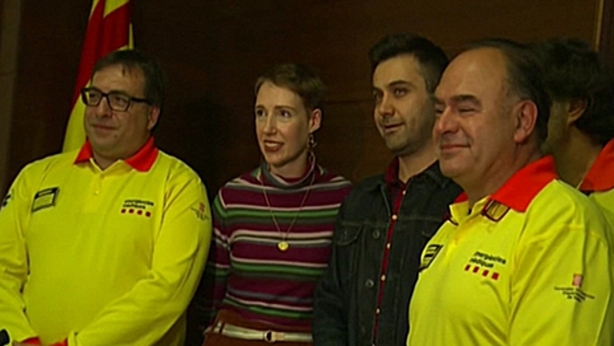 "It is the longest instance of cardiac arrest survival that we have ever documented in Spain," doctor Eduard Argudo, who heads the unit, told AFP, saying similar cases had been documented in the Alps and in Scandinavia.

Dr Argudo said that part of the reason she survived was due to the hypothermia.

"The hypothermia killed her but also saved her at the same time. With the cold, the body's metabolism slows down, the organs need less blood and less oxygen and that helps protect the brain," he explained.

Her recovery was unusually quick and within six days, she had left the intensive care unit without neurological damage.

Although her hands have not yet recovered full movement, "her life is practically back to normal" and "she will return to work in the coming days", the hospital said in a statement.