An Australian bushwalker who tumbled down a waterfall, breaking his leg, has told how he managed to crawl for two arduous days though scrub and forest to safety.

Neil Parker, 54, said his planned three-hour hike northwest of Brisbane went horribly wrong on Sunday when he slipped six metres down the waterfall, fracturing his leg and wrist.

"I cartwheeled and slammed into the rock and then landed in the creek at the bottom," he told reporters from his hospital bed.

The experienced hiker said the entire bottom half of his leg was hanging loose thanks to a "clean snap in half".

"Straight away, I thought, 'I'm now in a lot of trouble because no-one knows where I am'."

He immediately tried to phone for help, but after dropping his mobile "into the drink" started crawling back to a clearing where he believed he would have a better chance of being rescued.

Efforts to attach a makeshift splint to the badly injured leg were ultimately successful, but caused pain so great he hallucinated, Mr Parker said.

With just a "handful of nuts, a protein bar and some lollies" to sustain him, Mr Parker began the excruciating 3km journey, "scrambling and lifting, inch-by-inch" to the clearing.

"What took me 40 minutes to walk up took me nearly two days to crawl back down," he said. 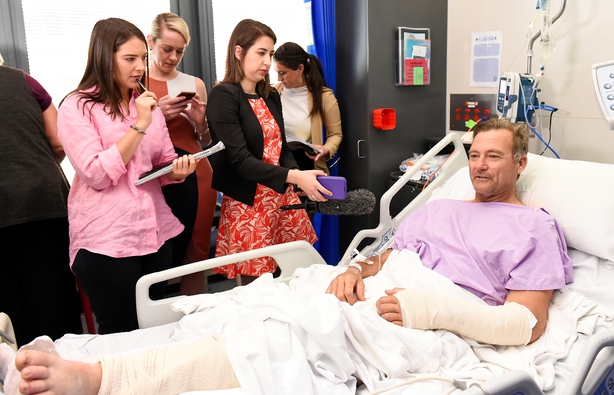 He saw a search-and-rescue helicopter flying overhead on Sunday night, but knew there was no chance of them finding him as he was "deep under the scrub".

Mr Parker was eventually spotted by the helicopter and winched out yesterday afternoon.

A Brisbane man is lucky to be alive after falling 6 metres down a waterfall and spending 2 nights stranded in the bush. Neil Parker has shared his incredible tale of survival, crawling through the bush with a fractured leg, after what was meant to be a short bushwalk. @G_Chumbley pic.twitter.com/CQOM8f7tOZ

Mr Parker - who founded a bushwalking club and has helped rescue other stranded hikers in the past - said knowledge had been instrumental to his survival, as he had set out well prepared with items such as bandages, a compass, and even a sleeping bag.

But it was the thought of his family, including his estranged son, that pushed him to keep going during a mentally taxing experience.

"The family connection, to let them know that I'm OK, just kept driving me," he said, adding that he would now be reunited with his son after several years of distance between them.

"I wanted to be around for my kids."