Japan's new Emperor Naruhito has formally ascended the Chrysanthemum Throne, a day after his father's historic abdication, and vowed to stand with the people as the country begins a new imperial era.

In a brief address, his first to the nation since inheriting the throne, Naruhito vowed to "act according to the Constitution" while "always turning my thoughts to the people and standing with them".

He officially became emperor at the stroke of midnight but the process was formalised in an earlier ritual, which was off-limits to female royals - even his wife Masako.

The emperor entered the Imperial Palace's Pine Room in formal Western clothing and a heavy gold chain of office, accompanied by male family members including his brother Akishino.

The 59-year-old was presented with the items his father Akihito relinquished a day earlier: sacred imperial treasures of a sword and a jewel, as well as the seal of state and his personal imperial seal.

The sole woman invitee was the only female member of Prime Minister Shinzo Abe's cabinet.

The ceremony took place on the first day of the new imperial era of Reiwa, meaning "beautiful harmony", which will last throughout Naruhito's reign.

Shortly afterwards, Empress Masako arrived by car at the palace in a diamond-studded tiara to join Naruhito, the nation's 126th emperor.

He said he would "reflect deeply" on the example set by his popular father Akihito, and that assuming the throne filled him with a "sense of solemnity". 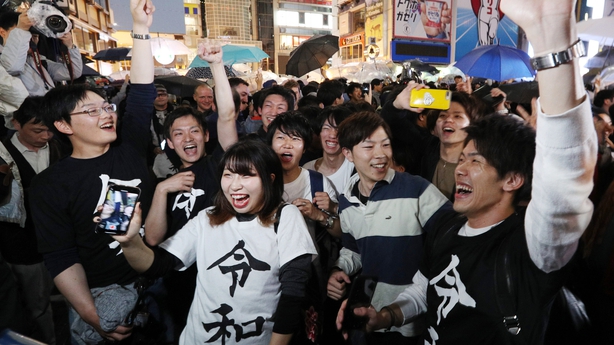 Inside the mysterious world of Japanese royalty

Mr Abe, replying on behalf of the people, said: "We are determined to create a bright future for a proud Japan filled with peace and hope at a time when the international situation is changing dramatically."

After heavy rain dampened celebrations for the abdication yesterday, the public took advantage of sunnier weather to flock to the Meiji Shrine in the heart of the capital where free sake was served ahead of a display of horseback archery.

Emperor Naruhito will make his first public appearance on Saturday when he will again address the people of Japan.

But the real pomp and ceremony will wait until 22 October when he and Masako will appear in elaborate traditional robes for a ceremony in the palace before parading through the streets of the capital to be congratulated by a host of world leaders and royals.

Emperor Naruhito will greet his first foreign head of state as emperor later this month, when US President Donald Trump visits Japan to meet the new monarch.

The Oxford-educated new emperor faces the delicate balancing act of continuing his father's legacy of bringing the monarchy closer to the people while upholding the centuries-old traditions of the Chrysanthemum Throne.

Like his popular father Akihito, he has warned of the need to remember World War II "correctly," without downplaying Japan's early 20th-century militarism.

He has also spoken of the need to modernise the royal family, and vowed when he married Masako - who left behind a promising diplomatic career - to protect her "at any cost".

She has struggled, however, to adjust to palace life, including being subjected to enormous pressure to produce a male heir, and has suffered stress-induced "adjustment disorder" for much of their marriage.

The couple have one child, a 17-year-old daughter called Aiko, who cannot inherit the throne because she is female.

In a statement released on her birthday in December, Masako pledged to do her best despite feeling "insecure" about becoming empress.

In the candid statement, she said she was recovering and could "perform more duties than before", crediting the "powerful support" of the public.