A towering stack of marijuana that weighed a hefty 800kg went up in smoke today as Indonesian police lit up the pungent contraband.

Authorities in the Muslim-majority nation's Aceh province took a match to the bricks of pot.

They also destroyed 19kg of methamphetamine seized in raids this year. 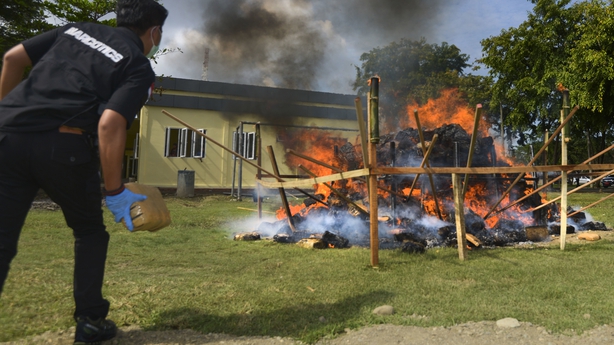 Five drug suspects in bright-orange prison garb were paraded around the ceremony.

Aceh is a deeply conservative region at the tip of Sumatra island that publicly whips criminals for a range of offences including gambling, drinking alcohol, and having gay sex or relations outside of marriage.

Indonesia also has some of the world's strictest drug laws.

This month, five foreigners were arrested in Bali for drug trafficking, with a German and Peruvian possibly facing execution if convicted.