Turkish President Recep Tayyip Erdogan has said he is closely following the case of missing Saudi journalist Jamal Khashoggi after Turkish officials said they believed he had been killed at the Saudi consulate in Istanbul.

Mr Erdogan told reporters that authorities were examining camera footage and airport records as part of their investigation into the disappearance last week of Mr Khashoggi, who had been increasingly critical of Saudi Arabia's rulers.

A former newspaper editor in Saudi Arabia and adviser to its former head of intelligence, Mr Khashoggi left the country last year saying he feared retribution for his criticism of Saudi policy in the Yemen war and its crackdown on dissent.

On Tuesday he entered the Saudi consulate in Istanbul to get documents for his forthcoming marriage.

Saudi officials say he left shortly afterwards but his fiancée, who was waiting outside, said he never came out.

Two Turkish sources said Turkish authorities believe Mr Khashoggi was deliberately killed inside the consulate, a view echoed by one of Mr Erdogan's advisers, Yasin Aktay, who is also a friend of the Saudi journalist.

"My sense is that he has been killed...in the consulate," Mr Aktay said. 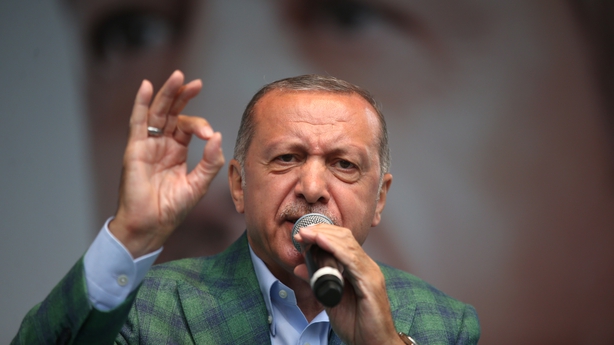 Mr Erdogan (above) said he was personally following the issue, without saying what he believed had happened to Mr Khashoggi.

"Entries and exits into the embassy, airport transits and all camera records are being looked at and followed. We want to swiftly get results," he said, adding without explanation: "My expectation is still positive."

A Saudi source at the consulate denied that Mr Khashoggi had been killed at the mission and said in a statement that the accusations were baseless.

The consulate has also denied that Mr Khashoggi was abducted.

"We are not in a position to confirm these reports, but we are following them closely," the official said.

Mr Khashoggi's fiancée could not immediately be contacted but she said in a Tweet that there had been no official confirmation of the Turkish sources' statements. "Jamal was not killed and I do not believe he was killed," Hatice Cengiz posted.

Another Turkish security source said that a group of 15 Saudi nationals, including some officials, had arrived in Istanbul in two planes and entered the consulate on the same day Mr Khashoggi was there, and later left the country.

The source said Turkish officials were trying to identify them.

Turkey's Anadolu news agency also reported that the group of Saudis were briefly at the consulate.

Mr Khashoggi is a familiar face on political talk shows on Arab satellite television networks and used to advise Prince Turkial-Faisal, former Saudi intelligence chief and ambassador to the United States and Britain.

Over the past year, he has written columns for newspapers including the Washington Post criticising Saudi policies towards Qatar and Canada, the war in Yemen and a crackdown on dissent which has seen dozens of people detained.

"I have left my home, my family and my job, and I am raising my voice," he wrote in September. "To do otherwise would betray those who languish in prison. I can speak when so many cannot."

Two months later, writing about the detentions of scores of Saudi royals, senior officials and businessmen accused of corruption, he said Crown Prince Mohammed bin Salman dispensed "selective justice" and said there was "complete intolerance for even mild criticism" of the crown prince.

Relations were already strained after Turkey sent troops to the Gulf state of Qatar last year in a show of support after its Gulf neighbours, including Saudi Arabia, imposed an embargo on Doha.

Mr Erdogan's adviser Aktay said that Turkish authorities believed the group of 15 Saudi nationals were "most certainly involved" in his disappearance.

"The Saudis are saying we can come investigate, but they have of course disposed of the body," he said, adding that he believed Saudi statements about a lack of footage from security cameras were insincere.

Saudi Consul-General Mohammad al-Otaibi said yesterday that the consulate's own security cameras showed only a live stream and did not record footage, so they could not provide evidence of Mr Khashoggi's movements.

The Committee to Protect Journalists said it was alarmed by reports Mr Khashoggi may have been killed inside the consulate.

"The Saudi authorities must immediately give a full and credible accounting of what happened to Khashoggi inside its diplomatic mission," the CPJ said in a statement.