Crushed by years of recession and political upheaval, Brazilians will head to the polls this weekend in the first round of presidential elections.

More than 147 million Brazilians are eligible to vote for their preferred candidate on Sunday.

Voters will also cast ballots in elections for state governors and federal representatives.

In Ireland, more than 2,100 Brazilians are registered to vote, however they will only have their say on the presidency.

The economy, crime, corruption and equality have become contentious issues for campaigners.

Millions of jobs were lost in Brazil in recent years, with unemployment now hovering over 12%, while a new report shows there were 63,880 killings last year.

Trust in government has wobbled too, after the 2016 impeachment of former President Dilma Rousseff amid a corruption scandal and economic crisis.

Thirteen people are running for the presidency but it is likely none of the candidates will win an outright majority of valid votes this weekend.

That means the two leaders from Sunday’s poll will face each other in another vote on 28 October.

Opinion polls suggest poles-apart candidates Jair Bolsonaro and Fernando Haddad will go head-to-head at the end of the month.

Other candidates who could earn enough votes to advance to the second stage of voting include Ciro Gomes, Geraldo Alckmin and Maria Silva. 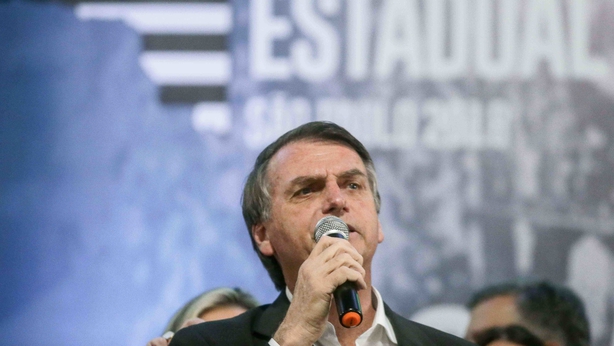 Front runner and far-right politician Mr Bolsonaro has left a trail of controversy in his path.

The former army captain is running on a platform of liberalising gun laws, while cracking down on crime and corruption.

A member of the relatively small, conservative Social Liberal Party, he also has the backing of millions of evangelical Christians who praise his anti-abortion stance.

However, the 63-year-old is a hugely divisive figure and has become one of Brazil’s most influential politicians online, with more than 10 million followers across a range of social media networks.

Mr Bolsonaro’s comments, seen as homophobic and misogynistic, have gained him headlines around the world.

In 2016, he said during an interview with Brazilian TV presenter Luciana Gimenez that he would not employ a woman "with the same salary as a man" because women get pregnant.

He has said he was misinterpreted and that he was only voicing the rationale of employers.

Mr Bolsonaro also told Congresswoman Maria do Rosario, from the left-wing Workers Party: "I wouldn't rape you because you don't deserve it."

Some of his opinions have landed him court cases. He was accused of racism after remarks he made about descendants of African slaves in 2017. In September this year, the Supreme Court cleared him of these charges.

The movement against him has been online and on the streets.

In September, tens of thousands of women took to the streets to protest against him.

The words ‘Ele Não’ (Not Him) were seen on stickers and banners and were shouted by the crowds.

Female celebrities in Brazil are also protesting his rise in the polls using the hashtag #EleNão, including actress Deborah Secco, who tweeted: "#EleNao is not just about politics. It is about morals."

Mr Bolsonaro’s future as a candidate was even threatened by his opponents after being stabbed at a rally on 6 September.

He was discharged from hospital last Saturday but he has not been able to resume campaigning before the first stage of the vote.

However, his power and influence cannot be underestimated as his poll numbers increased while in hospital.

Supporters of Mr Bolsonaro, nicknamed "bolsominions", have also taken to the streets to defend him.

Mr Bolsonaro’s nearest rival is Mr Haddad, from the left Workers’ Party (PT) and a former mayor of São Paulo.

The 55-year-old is campaigning for tax cuts to the poor, higher tax rates for the rich, increased protections for LGBT community and demarcation of indigenous lands.

He has also focused his campaign on a promise to reverse austerity measures and increase spending to drag the country out of recession.

However, Mr Haddad has only been the Workers’ Party nomination since 11 September.

He was propelled to candidate after party colleague former Brazilian president Luiz Inácio Lula da Silva, known as ‘Lula’, was barred from running in the election.

Lula was campaigning from behind bars after he was given a 12-year sentence for corruption.

At the beginning of September, Brazil’s top electoral court ruled that Lula could not run in the election.

The Workers’ Party replaced Lula with Mr Haddad with one month to go until the first vote.

The party is hoping that support for the former president can transfer enough votes to Mr Haddad.

However, some refuse to back Mr Hadded’s Workers’ Party after corruption scandals over the years.

More than 2,100 Brazilians living in Ireland are eligible to vote on Sunday.

However, the Brazilian Embassy in Ireland estimates that figure is much higher and believes there are around 25,000 Brazilians in Ireland.

Deputy Head of Mission at the Embassy, Paulo Azevedo Ribeiro, told RTÉ News many people who are on temporary visas would not move their vote as it was a "big deal" to transfer it abroad.

Polls open at the embassy in Dublin from 8am to 5pm on Sunday.

Mr Ribeiro said it was important for people to bring a form of Brazilian ID with them.

Campaigning will not be permitted inside the embassy, according to Mr Ribeiro.

The election is not only for president but state governors and federal representatives.

Brazilians eligible to vote in Ireland will only be able to vote for the presidency.

The Embassy of Brazil in Ireland said people can watch the results online at www.tse.jus.br