Parts of the UK are expected to see temperatures of 34C as the hot spell of weather reaches its sweltering peak today.

The Met Office said London and potentially some spots in East Anglia are most likely to reach the 34C high, making it the hottest day of the year so far.

Away from the capital and the southeast, 27-30C is expected across most of England and Wales.

A high of 29.5C was recorded at Northolt in west London yesterday, surpassing the 2022 high of 28.2C recorded at Kew Gardens on Wednesday.

While England and Wales will bask in the heat today, it will be cooler in Northern Ireland and Scotland, which will both be affected by rain.

Meanwhile, firefighters are warning that there is an increased risk of fires due to the heatwave.

London Fire Brigade said it has already attended more than 1,430 grass and open land fires across the city this year.

Around 350 of these were in domestic gardens and LFB said that with prolonged periods of hot weather, there is a concern these numbers will rise.

In the last five years, London's firefighters have attended almost 600 fires involving barbecues, 45 of which were on private balconies.

The Brigade's assistant commissioner for fire safety, Charlie Pugsley, said: "We want people to enjoy the glorious weather and do so safely.

"Barbecuing on dry grass is reckless and can easily cause a really serious fire - damaging the immediate area and risking nearby properties.

"We're also urging people to think twice about having barbecues on balconies.

"It's easier than you might think for a balcony fire to spread to others, which could not only leave you homeless but displace hundreds of your neighbours too.

"We're not trying to take the fun out of the heatwave, but for the sake of our city - and of our firefighters who have to work in sweltering temperatures to tackle these blazes - we'd really like people to take our advice on board.

"We're asking the public to remain vigilant and call 999 as soon as they see any signs of smouldering grass."

Firefighters are also warning residents not to risk their safety for a cooling swim.

In the last five years, crews have attended almost 300 reports of a person in water or at immediate risk of entering water.

The LFB said there were nine accidental drownings in London last year, making it the joint third highest in the UK.

The UK Health Security Agency and the Met Office have issued a Level 3 Heat-Health alert for London, the east of England and the southeast. 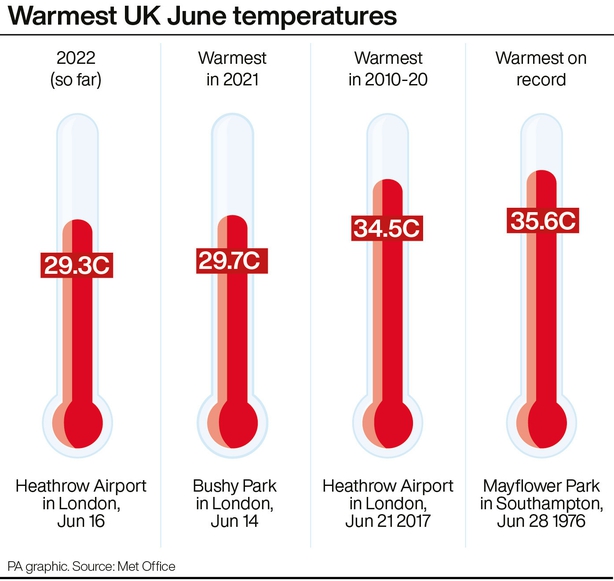 This alert follows the Level 2 alert issued on Tuesday and confirms that the Met Office's threshold temperatures for an alert will be reached in three regions from today.

A Level 2 alert remains in place for the east midlands and southwest.

The Met Office warned that there may be difficult sleeping conditions, with temperatures expected to stay between mid and high teens.

Forecasters said that it would be termed a tropical night if nowhere drops below 20C.

Britain's highest recorded June UK temperature was 35.6C at Southampton Mayflower Park in June 1976. Forecasters do not expect that high to be surpassed this week.