Americans are today marking the 21st anniversary of the 9/11 attacks, with US President Joe Biden visiting the Pentagon and New Yorkers honouring the nearly 3,000 people killed when hijacked planes destroyed the Twin Towers.

Relatives of victims, police officers, firefighters and city leaders gathered at the National 11 September Memorial in Lower Manhattan, where the names of those who died were read aloud - as they have been every year since the deadliest single attack on US soil.

They rang bells and held moments of silence at 8:46 am and 9:03 am, the precise times the passenger jets struck the World Trade Center's North and South Towers.

President Biden commemorated the anniversary at the Pentagon in Arlington, Virginia where Al-Qaeda hijackers crashed a plane into the massive building that serves as Defence Department headquarters.

In a steady rain, the president approached a wreath of flowers outside the building and placed his hand over his heart.

"Twenty-one years later, we keep alive the memory of all the precious lives stolen from us at Ground Zero, in Shanksville, Pennsylvania, and at the Pentagon," Mr Biden said on Twitter ahead of delivering remarks.

"To the families and loved ones who still feel the ache, Jill and I hold you close in our hearts."

Al-Qaeda hijacked a total of four planes. The third hit the Pentagon and the fourth, Flight 93, crashed in a field in Pennsylvania after passengers launched a revolt onboard.

Relatives hugged one another, placed flowers at the memorial and held placards or wore shirts with images of their lost loved ones.

"While the grief recedes a bit with time, the permanent absence of my father is just as palpable as it ever was," the son of Jon Leslie Albert said after reading several victims' names, including his father's.

Messages of sympathy and support came from outside the country, including from NATO Secretary General Jens Stoltenberg and Ukrainian President Volodymyr Zelensky, who called 11 September "one of the most tragic days" for the US and the world.

"Facing missile attacks daily, Ukraine knows well what terrorism is and sincerely sympathizes with the American people," President Zelensky tweeted, referring to the Russian invasion of his country that has left thousands dead.

New York was illuminated last night by a "Tribute in Light" that showed two blue beams projecting into the night sky symbolising the Twin Towers. 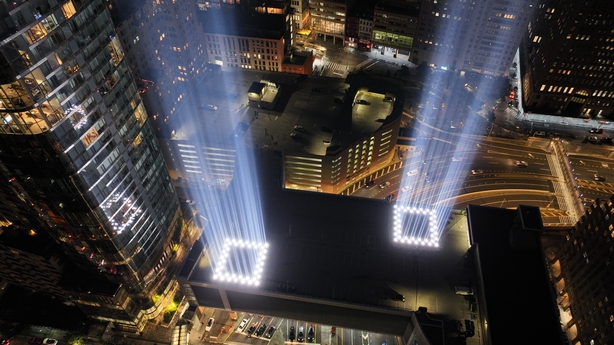